Apple and Google grow their smartphone platform share in the US

Market analytics firm comScore has released the latest data from its MobiLens service, showing key trends for the American mobile phone industry, for the last quarter that ended in April 2011. According to the company 74.6 million people in the US owned smartphones during the three months ending in April 2011, which is a 13% increase from the previous quarter that ended in January of this year.

Google’s Android ranks as the top smartphone operating system (OS), powering 36.4% of US subscribers devices, which is up by 5.2% points. Apple also managed to up its stake of the US smartphone platform market by 1.3%, taking over the number 2 spot on the list from RIM, with 26% of the smartphone market. BlackBerry holding company Research In Motion (RIM) completes the top 3, handing over 4.7% points to Google and Apple, to end up with a 25.7% stake.

Microsoft looking to add to its Windows Marketplace apps tally

Brandon Watson, director for Windows Phone 7, commented: “We recognize the importance of getting great apps on our platform and not artificially inflating the number of actual apps available to customer by listing ‘wallpapers’ as a category, or perhaps allowing competitor’s apps to run on the platform [like RIM’s BlackBerry Tablet OS is able to do with Android apps] to increase ‘tonnage’.” 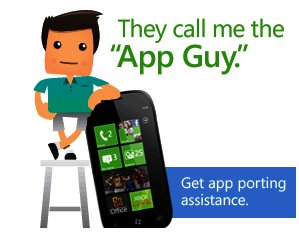 Speaking about Microsoft, the company might be interested in buying graphics processing unit (GPU) and mobile CPU maker Nvidia. According to geek.com, Microsoft wants to see Nvidia remain independent. The option to acquire the company comes into effect if it is approached by another potential buyer, which offers the chipmaker $3.4 billion or more for 30% of the company's shares. Redmond can then decide to throw its hat into the ring and offer Nvidia more money. Microsoft recently purchased Skype for $8.5 billion dollars, around double what Facebook and Google were willing to buy it for.

On the topic of rumoured acquisitions, the tech rumour mill was abuzz this week about a possible acquisition of Nokia by Samsung. There was also plenty of possible speculation as to why the Korean tech giant would want to purchase Nokia, with the Business Insider asking if the strong global distribution channels would justify the $20 billion+ pricetag.

Florian Mueller of the FOSS Patents blog brought up an interesting point on Twitter though, posting: “If Samsung really bought Nokia, the two most massive patent portfolios currently in use against Apple would merge.” Samsung is currently in the midst of a legal court drama with Apple concerning its Galaxy line-up of smartphones and tablet PCs and their alleged similarity to Apple’s products.

Nokia’s CEO Stephen Elop delivered an address during the Open Mobile Summit in London yesterday, stating that Apple was responsible for the creation of Android. Not directly responsible, as in they made the mobile OS, but created the need for a more open operating system. He stated “Apple created Android, or at least created the conditions necessary for Android to come into being”. He explained that Apple introduced the world to the capabilities of the smartphone, but that the Cupertino-based tech outfit did this in a very “Apple way” with its “closed” iOS operating system. This resulted in the need for a different approach, which is where Google stepped in and Android was born.