The data pricing wars continue, with Vodacom announcing a revision of its data services structure and pricing, which will see contract data customers saving up to 43% and get double their data for free with Night Owl, moving the effective savings to as high as 72%.

This move means that as of 1 August customers will fork out less for accessing the internet, paying as little as 7 cents per MB for their data consumption. The revised data costs help bring the company more in line with Telkom-owned 8ta’s mobile broadband cost options, announced last month.

All existing and new Vodacom contract customers will be given another allocation of the same size as their subscribed data bundle, to use anytime between midnight and 05:00 AM. This service, called Night Owl, is now available as standard to all Vodacom contract subscribers.

Contract customers will receive more value from these revised Broadband Standard prices. To illustrate the additional value, the company stated that Vodacom customers who previously bought a MyMeg 110 data bundle at R88 (80c per MB), will now only pay R49, for a MyMeg 100 (49c per MB) - a cost saving of 39% per MB. They will also get double their data for free (via Night Owl) resulting in a net saving of 69%.

“Vodacom’s change to red brought with it the promise of real changes to the network, customer service and value. We hope these price reductions will contribute to making the Internet more affordable and give our customers an enhanced connected experience,” said Pieter Uys, chief executive officer at Vodacom.

Over and above these Broadband Standard price reductions, Vodacom also provides the following services:


“We are committed to finding ways to make our customers smile and we will continue in focusing all our efforts towards delivering on this promise,” Uys concluded. 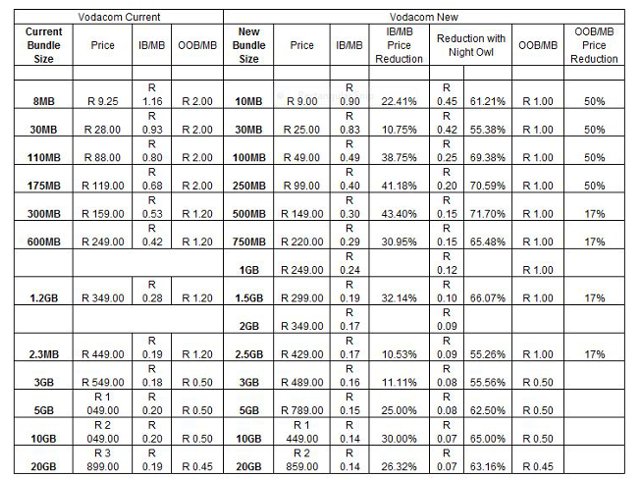 Vodacom also recently announced that it will once again be donating R150 000 for every goal scored by a local team, during the 2011 Vodacom Challenge soccer tournament, tanking place between 16 and 23 July.