If you were a kid growing up in the 90's chances are some of your best childhood memories are tied to Nintendo's incredibly addictive Pokemon franchise. Back in the day the TV show and trading cards were followed and collected almost fanatically by kids, sparking one of the biggest toy crazes since the hoola-hoop.

If you enjoyed Pokemon back then, chances are also that somewhere along the line you came across Nintendo's line of Pokemon games for its Gameboy handheld. These games, dating back to 1995, proved to be incredibly solid and addictive role-playing games that saw the player go on an epic journey in search of new Pokemon to catch, new opponents to battle, and most importantly, to defeat the greatest trainers in the world and become the ultimate Pokemon master.

The latest iteration in the classic series comes to us in the form of Pokemon Black and White, set in the brand new region of Unova. As with all releases, two different games (such as Red and Blue, or Gold and Silver) are released, differing only slightly in the kinds of Pokemon you can receive, and sometimes including special locations. We received the Pokemon White version of the game, and immediately set off on our new journey.

Fans of the series will be glad to know that the new games continues the classic recipe. The top-down RPG will once again see players starting off in their tiny hometown, receiving their first Pokemon from the resident Pokemon researcher and then going about their journey. In terms of gameplay a lot of aspects remains unchanged, but given its addictive formula this isn't a bad thing in the slightest. Pokemon veterans will also notice a number of changes and additions to the new games which serve to make the experience that much more rewarding. 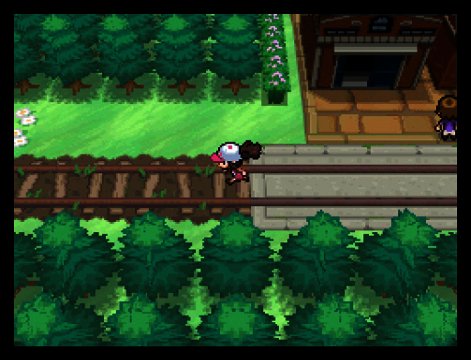 And we're off!
Gameplay

The moment we started off on our new adventure in the Unova region we noticed a number of changes to the norm. First off we were introduced to Professor Juniper, the first major female Pokemon researcher in the games. Another change, albeit one that was already introduced in a degree in Platinum, is our two friends/rivals, named Cheran and Bianca. They're the same age as you, meaning they'll also be going on their own Pokemon journeys and throughout the game you'll encounter them, both as allies and opponents in battles.

Prof. Juniper introduced us to the three starting Pokemon in the new region; Snivy a grass Pokemon that looks like a cross between a lizard and a snake, Tepig the fire pig Pokemon, and Oshawott, a water Pokemon which can only be described as a sea otter of some sort.

Players then pick the monster that most strikes their fancy, in our case we decided to go for Snivy. After a short initial tutorial we took our first steps out into Unova, venturing into the tall grass in search of some new critters to catch.

Here Pokemon Black and White already steps away from tradition, not featuring any of the older generation Pokemon to be captured initially. Instead players are faced with brand new Pokemon from the start of your journey, with 156 new creatures introduced throughout the game. And while it's fun catching your old favourites again, the new Pokemon makes the game feel that much fresher. It's also great not running into countless Zubat and Rattata anymore, although Patrat and Woobat may incite the same kind of rage after a while. 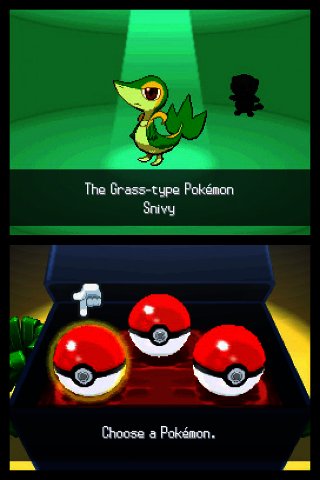 As in the previous games players have the goal of defeating the Pokemon league and becoming the new Pokemon Master for that region. To do this players will have to travel to various towns throughout the world, challenging their resident Gym leaders to Pokemon battles. The leaders of these Pokemon Gyms are no pushovers, so make sure you've trained enough before trying to take a badge off one of them.

In addition to countless random trainers in the world who you'll battle for more experience, the game also introduces a more sinister foe, this time in the form of Team Plasma. Unlike the bungling Team Rocket of old, these guys actually seemed to be following a solid goal. This is also where Black and White shocked us by introducing a relatively mature concept into the game, the question of whether Pokemon deserve to be free, or if they simply serve as slaves for their trainers.

This, along with a number of other spoiler worthy content serves to drive the narrative in Black/White in a way we haven't seen before, making the adventure both new and familiar at the same time. 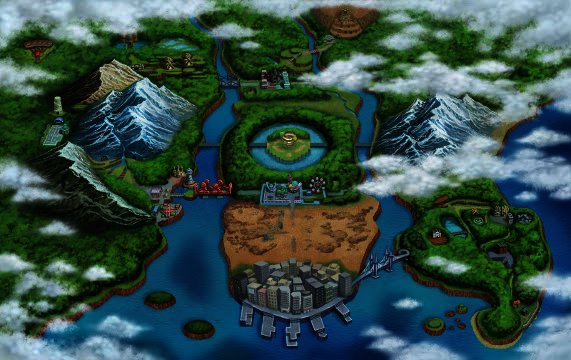 An overhead view of the new Unova region.
Battling

Pokemon White features the series' customary turn-based battle system, similar to ones featured in many Japanese RPG titles. When engaged in a battle players have the choice of attacking, switching to a different Pokemon, using an item or running away (only when facing wild Pokemon though). You can carry up to six Pokemon with you at a time, although an untold number can be kept stored for later use.

When engaging in battles players have to use their wits to land the right moves at the right time, if you do nothing but charge forth mindlessly battles can have a tendency of going badly. Instead players need to learn the strengths of their Pokemon, their different moves and how to use them, and of course its elemental type. A water Pokemon will usually have no trouble dealing with a fire Pokemon for example, and each type has its own strengths and weaknesses. And don’t think it’s restricted to water, fire and grass though, as a multitude of elemental types are present from electric to psychic to steel and fighting types. 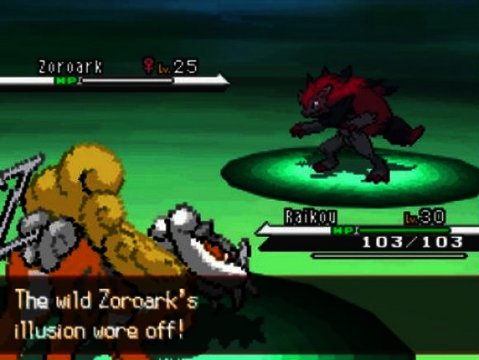 Typical Pokemon battle.
In addition to the standard battles, the new games also introduce two new fighting modes, Triple Battles and Rotation Battles. In triple battles each trainer has three Pokemon in the ring at once in an all out brawl. Here certain combined moves can be used to great effect, such as attacks that target all enemy Pokemon or status effects which can for example put the enemy to sleep or poison their Pokemon. These are enjoyable, although they function exactly the same as double battles, just with more Pokemon.

The one which impressed us the most was Rotation Battles, as they introduce a new layer of strategy to matches. These battles work much the same as Triple Battles (three Pokemon each), but this time one forward Pokemon can be rotated in and out of the fray. That is to say, players can choose which Pokemon to put in front, placing the heavy hitter in the seat to do damage, then recalling it to introduce a high hitpoint Pokemon to absorb your foes punishment. In normal triple battles any Pokemon can target any opposing Pokemon, but Rotation Battles forces you to aim at the one in front. 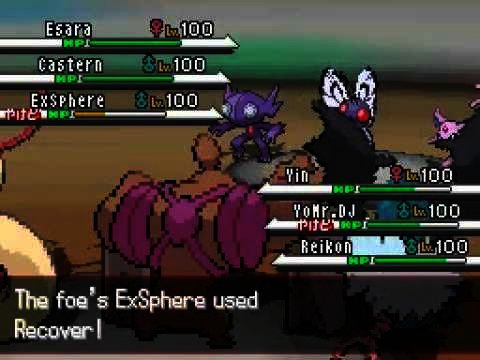 As a Nintendo DS game, Pokemon Black and White doesn't have the best graphics around, but given their platform these new games still impressed us a number of times. The new titles makes much more use of the DS's 3D features than previous games, with a new camera angle that gives players a slanted new perspective of the world. And no, it's not 3DS 3D, it's simply a more zoomed in camera system than was present on the previous top down only versions.

The game sports rich colours and improved Pokemon battle animations, with the critters moving around a lot more. There's still room for improvement no doubt, but veterans and newcomers will find something they like in the game's classic styling. Environments sees some of the most major improvements in the game, with large deserts and forests, and especially majestic bridges creating some surprisingly eye-popping visuals and great moments as the camera slowly sweeps over them.

The game also introduces seasons for the first time, with each month passing in the real world indicating a shift in season in the Pokemon world. For example, at the time of writing it was Spring within the game, with the next month shifting into Summer, and so forth. Seasonal changes includes the day/night switches occurring earlier or later, weather effects such as snow and rain being present in certain locations, and certain Pokemon appearing in different forms. Some wild Pokemon may also be less rare or more plentiful during certain times of the year, and different NPC interactions also become available as seasons change. 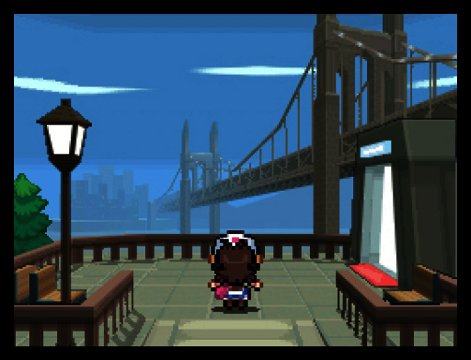 An example of the game's spectacular new views.
Multiplayer

A great new addition to the game is known as C-Gear, a new menu displayed on the bottom DS screen when the player isn't in battle. From this handy menu players can quickly connect to others via infrared, or to the internet via a Wi-Fi connection. This allows you to battle and trade Pokemon online, something which is immensely enjoyable. Certain rare Pokemon can also only be attained by trading with others, so if you want to catch them all you better get connecting.

Another online feature is Pass By, similar to the StreetPass feature found on the new Nintendo 3DS. When activated this feature will keep your DS's wireless connection active, even when it's closed, allowing your handheld to exchange game statistics with passing players. 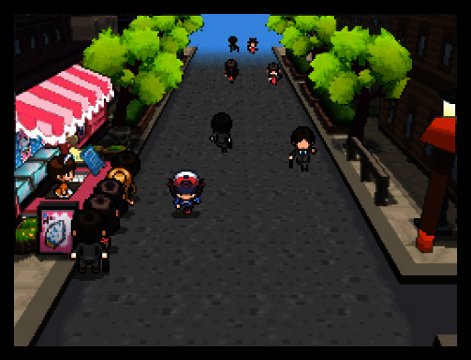 Pokemon Black and White continues the legacy of Pokemon games by introducing players to new monsters, items, battle modes and even gameplay changes, ensuring that even if it follows a tried and tested recipe, it brings enough to the table to warrant a new adventure. This game's content and scope is truly impressive, outlasting almost all modern competitors by giving players a main story that could take upwards of 40 hours to complete. A classic gameplay recipe in a new skin, Pokemon White is a must-buy for fans of the series and DS players in general.

PROS
Improved graphics, hundreds of new Pokemon, cities that dwarf anything seen before and a number of smaller details gives this game what it needs to stand out from the crowd.

CONS
Some of the new Pokemon designs could''ve been improved in our opinion, but this may just be nostalgia speaking.
TAGS:
PokemonNintendoPokemon Black/WhiteNintendo DShandheldPokemon White
USER COMMENTS