Nintendo fans who've been yearning to return to the golden beaches of Wuhu Island in Wii Sports Resort can now finally do just that, but this time you'll be exploring the island from the air in the 3DS's Pilotwings Resort.

With the launch of the world's first 3D-enabled handheld earlier this year, Nintendo decided to revive its enjoyable Pilotwings series, which last graced gamers' screens with 1996's Pilotwings 64. Now the casual flying title is back, this time challenging gamers' aerial skills in no-glasses 3D. 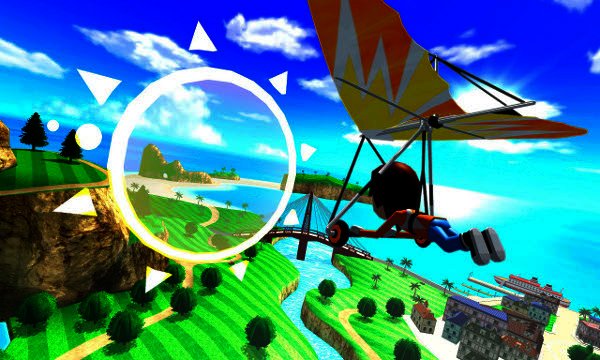 Pilotwings Resort is split into two main game modes, Free Flight and Mission Flight. In Free Flight aspiring pilots can explore Wuhu Island and its surroundings in an exploration and collection focused mode.

Initially you can choose between three different methods of airborne transportation, the prop airplane, hang glider or rocket belt, which we'll get into a bit later. After choosing your preferred vehicle gamers can explore the island, finding various collectible items and rewards in the process, including gold rings, Mii trophies, stunt rings, balloons and location markers.

The game forces you to make snappy decisions by giving you a two minute time limit though, making free flight a race against the clock as well.

The items up for grabs differ in their uses, with stunt rings for example requiring you to perform a certain trick as you pass through them. As far as rewards go, you can earn extended flight times on later excursions by collecting enough balloons, and there are small unlockable video clips which showcases the island in beautiful 3D. 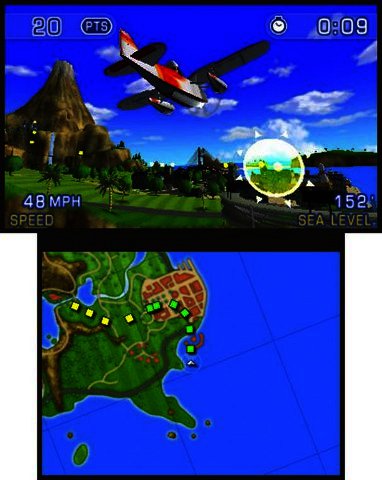 Completing the training and bronze missions should be a walk in the park for almost anyone, serving more as an introduction to the different vehicles and how they can be used. When progressing to the later levels though, from gold upward, the game can get quite unforgiving. Players can be tasked with anything from taking aerial photographs of the island's lighthouse, to fighting fires or shooting down targets tied to balloons, even exploring awesome landmarks such as the inside of a volcano.

The game ranks a player's performance based on a three star system, with a higher star rating awarded for not only completing a mission, but completing it in a faster time or with a higher accuracy rate for example. Players have to earn a certain number of stars in each category to be promoted to the next level, so you'll likely find yourself redoing some missions to earn that last star.

Getting the coveted three star rating on every level can keep achievement chasing players busy for hours, with perfect scores becoming insanely difficult in some later levels.

As previously mentioned, players get to pilot three different craft in Pilotwings Resort, the airplane, glider and rocket belt, with mastery of each required to progress in the game. These vehicles each feature different control schemes and will require different strategies to be flown optimally.

The plane responds as one would expect, with players able to speed up and slow down, bank to the sides and perform barrel roles. With the rocket belt on the other hand, you can't just navigate through a level by steering, here players have to control lift as well, balancing upward lift and forward momentum to bolt about. The rocket belt also has expendable fuel, so some wisdom needs to be applied when using it. The hang glider is controlled in a similar way to the plane, but instead of horse power keeping you in the air, players have to use strategically placed thermal air vents to gain altitude. 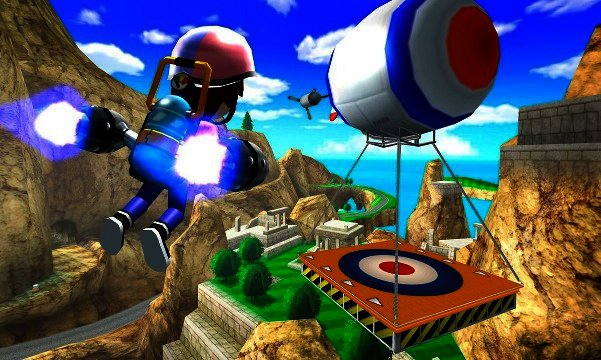 Later on in the game each of these vehicles can be upgraded to a more powerful version of itself, with the airplane becoming the turbo jet; the rocket belt turning into the super rocket belt; and the hang glider transforming into the pedal glider. The turbo jet and super rocket belt are faster and more powerful versions of their predecessors, while the pedal glider allows you to maintain altitude with the glider by rhythmically tapping a button.

All the vehicle controls responded nicely, with players also able to look around at the world by using the D-pad. Lazily gliding over Wuhu Island and enjoying the scenery is a fun experience in itself, and here the 3D effects of the Nintendo 3DS makes a big difference in making the world pop out and feel that much more immersive.

One of the most glaring omissions in Pilotwings Resort is the absence of any multiplayer functionality. One would expect to be able to fly alongside friends by this time, with many other 3DS titles supporting Wi-Fi multiplayer. The game also lacks StreetPass features, which is strange seeing as it's one of Nintendo's first party launch titles for the 3DS. 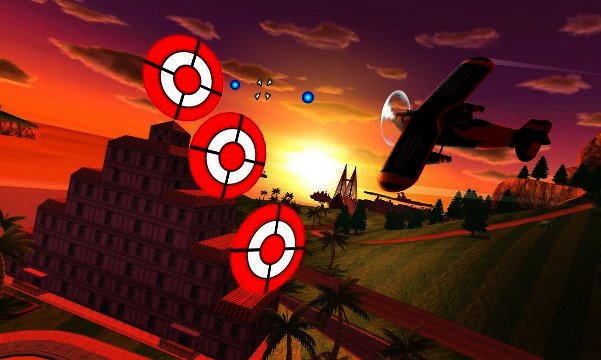 Aside from not supporting any multiplayer options, Pilotwings Resort is a generally impressive and surprisingly enjoyable title. The game may seem simple at first, but it actually contains quite a large amount of content, with around 40 missions available, and some of them really testing your aerial reflexes. The game also looks and sounds great on the 3DS, although it takes a bit of fiddling with the 3D slider to make the effect match up perfectly with your eyes.

PROS
Darting across the skies in a turbo jet is made even more awesome thanks to eye popping 3D effects.