Being released as one of the launch titles on Nintendo's new 3DS handheld, Steel Diver didn't cause the biggest splash on the gaming scene (excuse the pun), but after some careful examination the little title actually sports a number of merits, as well as some addictive gameplay. 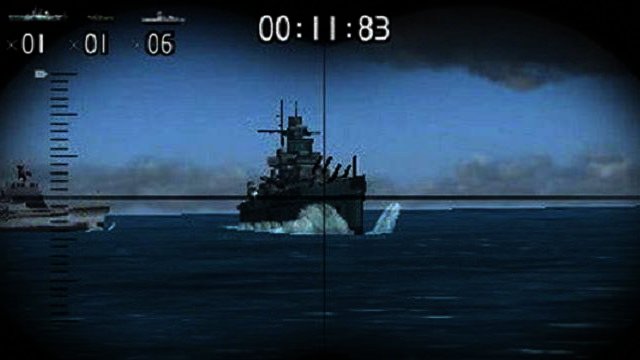 The best way we can describe Steel Diver is as a submarine simulator with bits of action puzzling thrown into the mix, and that's just the normal mode. Two additional mini-games sport resemblances to shooters and turn-based strategy games as well, but we'll get to these in a bit.

Starting off Steel Diver we're given a quick briefing of our situation, something to do with invading countries and creating the world's best submarine fleet. At the end of the day the story doesn't play a major role in the game, and is mainly used to propel you from level to level.

One thing we do know though, is that the 'Steel Divers' are made up of the best and brightest of the world's navies, and we get to control one of three of these steely submarines. The three different subs to choose from each sports its own strengths and weaknesses.

The compact Manatee for example is much easier to squeeze through narrow cave openings and crevices, while the colossal Serpent is less manoeuvrable but sports much greater firepower. Choosing the right sub for the mission at hand plays a large part in the game, although it's possible to complete all missions using all three different subs. 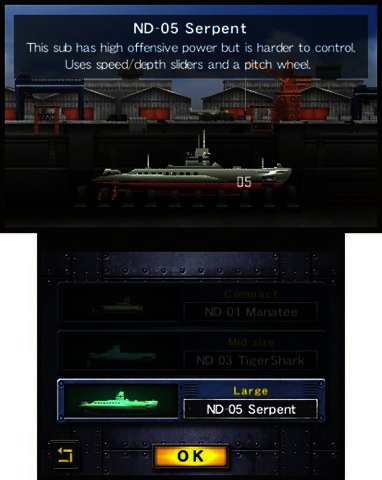 Playing through the main game's seven missions can become a surprisingly challenging affair, especially in later levels, as controlling your sub underwater is more difficult than it may appear. To successfully navigate the treacherous levels players must employ their 3DS stylus as well as some snappy decision making.

In a nice change of pace, players need to control and manipulate a number of different levers and controls using their stylus as the main input method. So no constant button bashing here, rather it becomes an art to adjust your vertical pitch to exactly the right level so you can barely scrape the ocean floor while evading that menacing underwater mine simultaneously.

To control your sub, players must adjust both horizontal and vertical controls, using the horizontal lever to control the engines and the vertical one to control the ballast, adjusting the rate at which you dive or surface. This may sound simple, but controlling forward (or backward) momentum as well as diving speed at the same time quickly becomes an intense affair, especially when other subs and ships are shooting at you.

This balancing act is what gives the game its charm. In addition to these basic controls, players can also fire torpedoes and deploy countermeasures to evade enemy projectiles. Using your countermeasures too often will leave you vulnerable though as these slowly deplete your air supply. When your air gets too low you'll either have to resurface and face possible enemy fire or perish beneath the waves.

Two of the submarines (the larger two) also feature a wheel that can be turned to adjust your sub's pitch, a useful feature when trying to hit pesky enemies. These relatively complex controls are a lot of fun to master, and you'll feel genuinely proud upon completing every challenging mission. Each level needs to be completed in a certain time limit as well, so you can't afford to scratch your head for too long either. 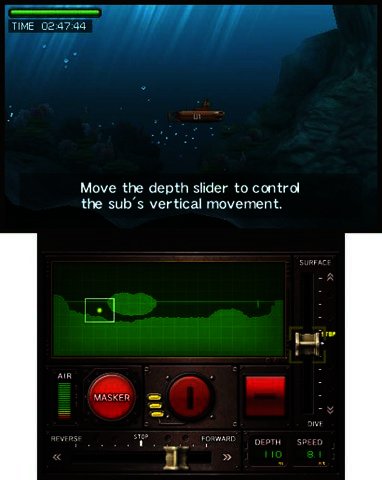 In addition to the main mission mode, Steel Diver also sports two additional mini-games to enjoy. The first is called Periscope Strike, a mode which utilises the 3DS' gyroscope to literally turn your handheld into a 360-degree periscope. It may look slightly odd, but being able to look for ships while actually moving around is a novel gameplay experience. We'd recommend sitting in a swivelling chair for maximum effectiveness, as you can simply spin around in your chair to survey your surroundings.

After each main mission players are entered into a quick periscope strike match, and depending on how well you do you can earn new decals to pimp out your submarine fleet. You can also enjoy the mode on its own, with the choice of hunting enemy surface ships, enemy submarines and even hunting enemy ships at night and in stormy weather. This last mode was our favourite, and looks great, as violent ocean waves tumble ships around as if they were inside a washing machine.

The second game mode is a two player (or player vs computer) turn-based strategy game called Steel Commander. This small top-down title plays a lot like a game of battleship, with players having to strategically place their ships while the other tries to take them out. It's an amusing extra game mode, but won't keep you entertained for very long. 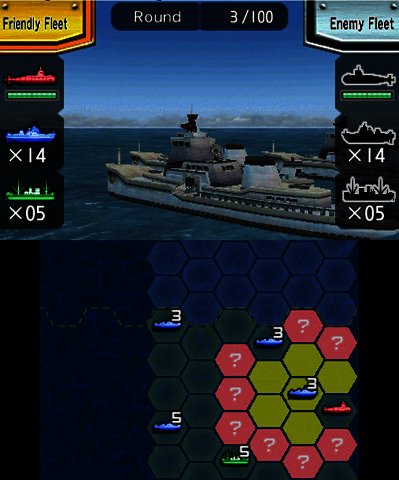 Of all the 3DS titles we've reviewed so far, Steel Diver probably makes the least use of the handheld's 3D features, seeing as it's set in a 2D plane. Players are still treated to the 3D effect, with subs and other variables popping out from the background, but it wasn't overly impressive.

The 3D really shines in periscope strike though, as you can literally see enemy torpedoes slicing through the water towards you. The title doesn't sport overly impressive visuals, but a few additions like schools of fish, moving bubbles and underwater vents does shake things up. We especially enjoyed one level where players have to contend with an underwater volcano as well as enemy submarines at the same time, with molten material spewing into the ocean (and on top of you if you aren't careful).' 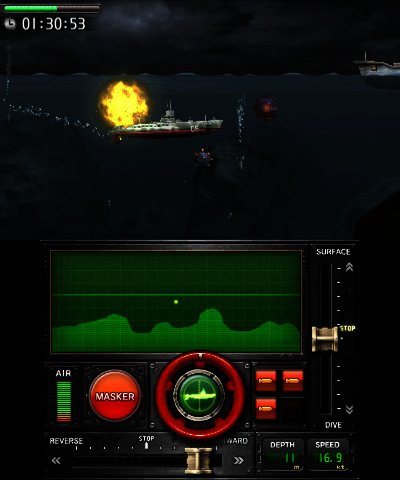 Steel Diver is an enjoyable little title for the 3DS, and if you have a soft spot for action puzzling and submarines it comes highly recommended. We were disappointed in the limited amount of replay value the title offers though, with only seven main missions present. An addictive game to be sure, but one which could've benefited from some extra content and multiplayer options.

PROS
Fumbling with the controls to dodge an outcroppping while firing at other subs and sneaking past minefields is a pretty enjoyable experience.

CONS
The game is way too short, and has limited replay value, this title holds promise but ultimately comes off as a rushed job.
TAGS:
steel diver3DSnintendohandheld3Dgames
USER COMMENTS