EA Sports brings out a new version of FIFA every year and always seems to set out to enhance the previous version as opposed to reinventing the football wheel. FIFA 11 continues this trend by bringing a number of improvements to the hugely popular franchise.
Football evolution over revolution
Although by no means a major overhaul, the minor improvements all add up to deliver a more authentic, rewarding and enjoyable football experience.
The first of these is Personality+, which is a new feature that allows individual abilities of real-life players to be reflected in the game, enabling a distinctive differentiation for most players when for example responding to a foul tackle.
What this means is that you’ll see a clear difference in the manner in which certain stars within your virtual team plays, for instance the charismatic and showman-like dribbling of Cristiano Ronaldo versus the aggressive runs of Wayne Rooney.
Where FIFA 10 introduced 360 degree dribbling, FIFA 11 adds Pro Passing, whereby your pass accuracy is determined by a number of factors such as your ability with the PS3 controller, the virtual player’s passing skill level, as well as the urgency of the situation on the pitch.
This translates to you having to time your passes better and also having to protect the ball. The latter is required as the players will do a lot more jostling for the ball with the opposition constantly seeking to push you off the ball, intercept a pass or tackling you.
This does serve to make the game more challenging and realistic as you definitely can’t use one player to dribble your way from your own goal to the opponent’s as with earlier versions of FIFA. It also means that winning a match, especially on the higher difficulty settings feels like more of an achievement because of the extra effort required. 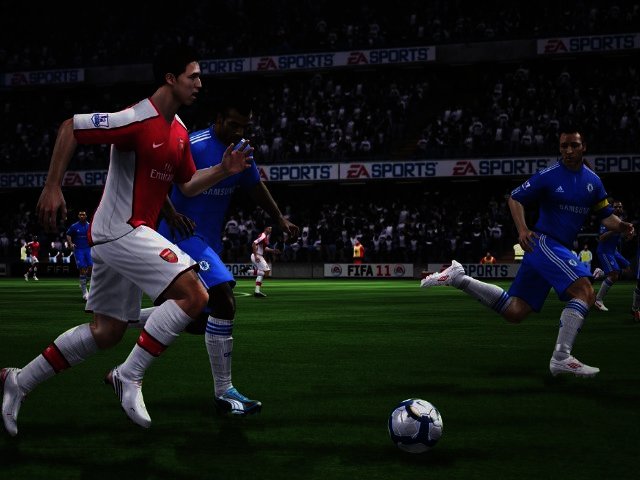 Graphics and match atmosphere
The game’s graphics also seem to have benefited from training sessions and this is much more noticeable on the PC which for the first time uses the same graphics engine as the PlayStation 3 and Xbox 360 versions.
On the PS3 though there are minor cosmetic improvements, with the player models, the grand stadiums and crowds having been touched up and helping to make the beautiful game look, well, more beautiful. Also better is the menu system employed in the game as it’s much more integrated. You can for example go to the transfer negotiations menu directly from the manager inbox if you receive a message of a failed transfer bid.
It’s not only the look of the stadiums that impress, but also the atmosphere within them. Playing with Real Madrid within the famous Santiago Bernabéu, you get a real sense of what it feels like on a match day as the announcer (speaking Spanish) runs down the famous player roster as the players take to the field.
He also announces replacements when they come on and the booing and shouting from the crowd also adds to the authentic feel. Although the commenting has undergone a refresher since the previous FIFA game, it won’t be too long before you’ll be able to predict the commentator’s vocal responses within most situations.
There is a minor glitch in the game however, whereby a player who scores a goal in front or close to the posts will go on his celebratory run right into the goal as though he doesn’t see its there. 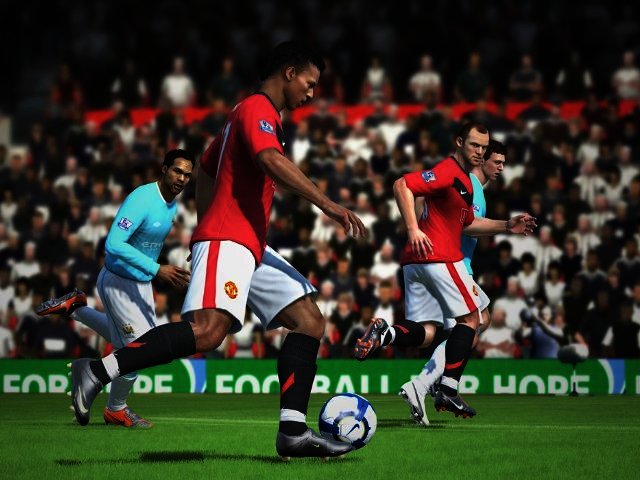 Stepping up as the last line of defence
Although all the cosmetic, atmospheric and gameplay enhancements kept us delighted, the coolest new addition is the fact that you can play as the goalkeeper of the team. Be A Pro career mode has been expanded to include a new Be A Goalie mode, which  brings a new level of excitement to the game, enabling you to make spectacular diving saves or to make a match saving stop from the penalty spot.
If you choose to play as a keeper for a big team, such as Edwin van der Sar of Manchester United you will get a new perspective on the game soaking up the atmosphere and visuals. Once the newness wanes, it can become a little boring on certain occasions, especially when playing against a weak team - a reflection of real-life football we suppose. You almost feel like you can vacate the goal for a smoke break or walk over to the spectators for an autograph session, before walking back to look at Rooney scoring another one.
If you get too bored though you can press select in order to switch your gaze to the action on-screen, also providing you with a little control over the passing and shooting of your teammates, but not direct control over their movements.
Final Word
FIFA 11 has become the fastest selling sports game ever according to EA and with its goalie career mode and minor improvements in terms of graphics and gameplay as a result of the company’s annual tinkering, will see it go on to garner many more fans.
It’s not perfect with its commentating becoming predictable after a while and the goal celebration glitch, but it’s the most authentic virtual football experience thus far. Look out for our PES 2011 review next week to see if it remains on top of the virtual football game league.

PROS
Everything's been tweaked in order to make it a little better, including the gameplay, graphics, menus and match atmosphere. You can now play as the goal keeper.