Just like Ronaldo and Messi compete each year for the FIFA Ballon d'Or award (best soccer player in the world), PES and FIFA duke it out for best soccer game of the year. Does PES 2014 finally have enough features to cause an upset?

Unlike EA, Konami opted not to kick off with next-gen this year and as a result concentrated all of its efforts into making PES look as good as it can on current platforms such as the PS3. PES 2014 employs a brand new gaming engine - the Fox engine - which is the very same tech that is breathing graphical life into Solid Snake and crew within the upcoming Metal Gear Solid 5: The Phantom Pain.

As a result PES 2014 actually looks better than FIFA 14 (review). You get beautiful looking stadia that feature a front row crowd which might be a little too low res for our liking, but is still better than the pixelated cardboard cutouts gamers get in FIFA.

Player models also appear more imposing and lifelike up close whilst the UEFA Champions League anthem is playing, but even during live gameplay PES 2014 delivers more treats in the eye candy department compared to its rival.

The ever present thorn in PES’s side remains licensing as there are very few teams or competitions with real world names. With regards to the latter, the exceptions are the UEFA competitions (Champions League and Europa League), Asian Champions league as well as the Copa Libertadores.

The menu system looks incredibly dated especially when compared to the new system employed within FIFA 14, but the flip side is that all the menus remain snappy and fluid without any signs of lag. 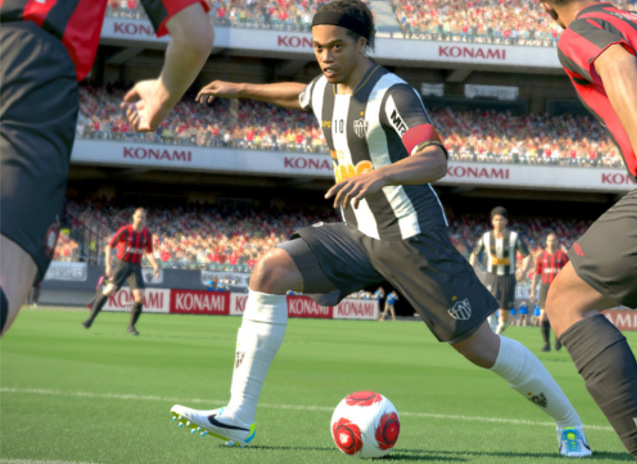 Under the gameplay bonnet changes are also made possible by the Fox engine. These include motion animation stability system (MASS), which simulates body contact between players to allow for more realistic physics.

Amongst other features MASS allows stocky defenders to block lofty attackers by protecting the ball or barge opponents off the ball to gain possession. This feature works well and does allow for an extra dollop of realism. It does not however match FIFA’s simulation feature list that includes the likes of protect the ball, player impact engine and real ball physics.

Where PES still exercises its superiority is in the buttery smooth passing system that remains crisp, quick and as slickly weighted as ever. 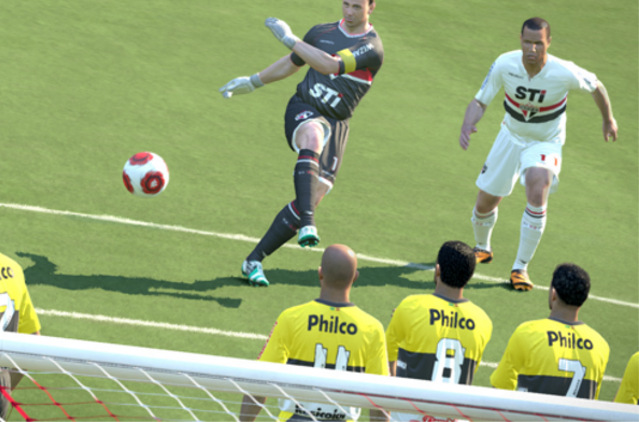 No matter how good you get at freekicks, you should not count on easily finding the back of the net whilst playing away from home thanks to a new feature dubbed Heart.

The heart of the beautiful game

Also worth a mention is the immensely corny Heart feature, which we initially thought was as representative of real world football as Mario Tennis is for Grand Slam action. Heart introduces an emotional element to the gameplay which has real technical repercussions.

Both FIFA and PES have excellent stadium atmosphere with crowds cheering on their home team. What used to be missing from these games in the past was the competitive edge that playing on your home turf imparted on your team.

This is where Heart comes into play since it enables matches to become imposing for visiting teams, and actually affects the performance of players. This means that even if you master the free kick system you will find it difficult to locate the back of the net on a pitch with a hostile crowd. Heart is basically the best in-game representation of what homeground advantage is for a real world team. 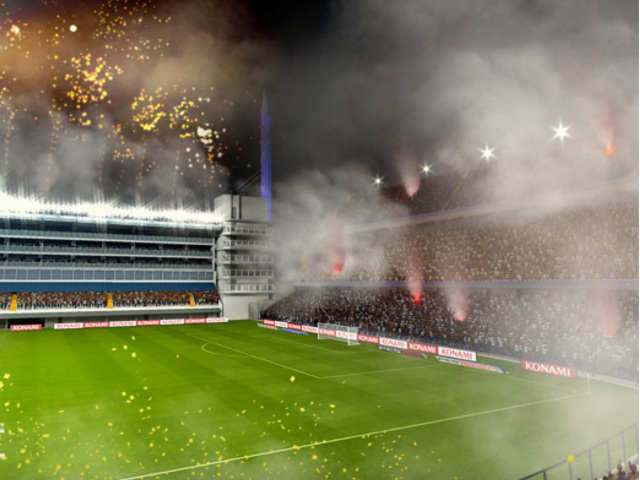 The look of the stadiums as well as the atmosphere within is authentically captured, especially within officially licensed competitions such as UEFA Champions League.

With its 2014 edition PES not only looks better than FIFA 14 but in a lot of ways is more enjoyable to play too. However the two seem to be targeting different types of gamers, with FIFA blowing its simulation and official licensing trumpet, whilst PES is a more easy fit for players who want to pick up and play an entertaining soccer or sports game.

In the end, what keeps you playing FIFA is the need to have your favourite real world team achieve virtual glory or your virtual likeness reach legendary status. What keeps you coming back to the virtual pitch within PES though is simply that it is an immensely enjoyable title to play, and that says a lot.

The PS3 version takes aim at your gaming budget for R600, which is R100 cheaper than FIFA 14 and you can also get it for Xbox 360, Windows PC, plus the ageing PSP and PlayStation 2.