Nowadays, smartphones and MP3 player software have plenty of onboard storage space, as well as capable music player software, to enable you to take all your favourite tracks with you wherever you go.

On occasion though, you might want to blast the sounds across the room in order to provide the tunes for a braai, or to simply pull off some decent air-guitar moves.

Although the Philips DC315 Clock Radio will be primarily utilised as a clock radio next to your bed, it also doubles as an entertainment docking stations for the iPod/iPhone, allowing you to boost the sound power of your music-playing device while also charging it (if its an iPod/iPhone) at the same time.

The Dutch manufacturer’s elegantly designed DC315 dock follows in the design footsteps of the iPhone/ iPod touch for which it is primarily manufactured for. It definitely isn’t going to annex the majority of your bedside table measuring a manageable 130 x 183 x 183 mm, and weighing in at 1.26 kg.

This device sports controls at the front and on the sides, which are quite easy and intuitive to use, as we managed to set the date, time and radio station channels without a blink at the manual. These controls also allow you to control your iPhone’s music player when it is connected, so you can skip tracks, play and pause without having to employ your smartphone to do this. Info such as date and time is conveyed to you via the devices’ display, which is very clear making the info very legible and you can adjust the brightness of this display to make it even clearer in the evening.

The only real design issue was that you lack the ability to utilise battery power as an alternate power source, as you can only use a two point power adapter (AC Input, 100 - 240 V AC, 50/60 Hz) to power the device. It limits you to using it in the close vicinity of a multi-plug, rather than being able to go outside and listen to music, when picnicking for instance, but like we stated before it will primarily function as a clock radio. You are able to do this, however, with other truly portable docks, the likes of the Memorex miniMove Portable Boombox Mi3x. 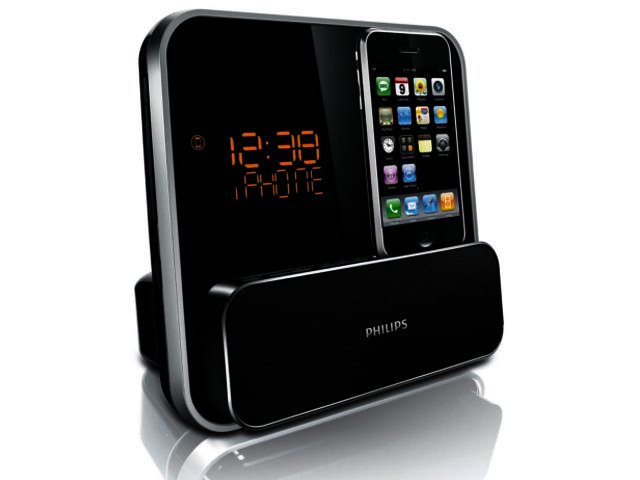 You are able to set two alarms, which is handy since you can set one for weekdays and one for over the weekends. The DC315 dock scanned and saved twenty radio stations (although you are able to manually search for stations yourself), and will function as a radio or alarm clock even when you iPod/iPhone isn’t connected.

Your iPhone or iPod touch can be connected to the DC315 dock using the propriety connector and once its connected the device will charge your mobile iOS-running unit. If you prefer to employ another smartphone or MP3 player, it can be done via the 3.5 mm stereo line in, with the cable being provided in the retail box.

Philips’ DC315 dock boasts two speakers (two x 4 W RMS) that provide you with 8 W RMS total output power. The sound power is enough to fill a room with slight levels of distortion only coming into play at the highest volumes. Bass levels are good, thanks to the Dutch manufacturer’s Bass Reflex Speaker System that differs from a conventional loudspeaker box system since it adds a bass pipe. The latter is acoustically aligned to the woofer, in order to optimise the low frequency roll-off of the system, which results in deeper controlled bass as well as lower distortion according to the manufacturer.

Although the bass level are very good, they still aren’t a match for a 2.1 speaker system that features dual speakers and a dedicated subwoofer.

Philips’ DC315 Clock radio for iPod/iPhone delivers a great boost to you portable music players sound power, whilst also incorporating some useful additional features such as the dual alarm clock and FM Radio. Bass levels were good, due to the company’s Bass Reflex Speaker system, but could have been better.

We also wished the excellent sound quality could have been maintained at all the sound levels and for a second battery powered option to make it more really portable. Other than that, this is a pretty capable entertainment dock for your portable media player. It goes for a recommended retail price of R899 (incl. VAT).

Additional functionality including the alarm clock and FM Radio is handy, great sound levels (loudness) as well as a good quality, easy controls and stylish design.

Not really portable as you must be in rage of a power socket to utilise it and distortion audible at the highest sound levels, also not the most affordable option in its class.

CONS
Not really portable as you must be in rage of a power socket to utilise it and distortion audible at the highest sound levels, also not the most affordable option in its class.
TAGS:
PhilipsiPod accessoryiPhone accessoryclock radio
USER COMMENTS