Microsoft All in One Media Keyboard

The depth of key press, how ergonomic a keyboard is, how light or heavy it is, the controls that is brings to the fore, its responsiveness and its extra features, all play a part in determining whether your working day is a Sisophysian or elegant one.

Microsoft’s All in One Media keyboard, thankfully contributes more to the former than the latter. The keyboard is admittedly quite small, making it portable enough to tuck into your notebook bag with ease. This also gives the impression that the keyboard is meant for Windows 8 tablet toters, whose tablet can accept the USB dongle. 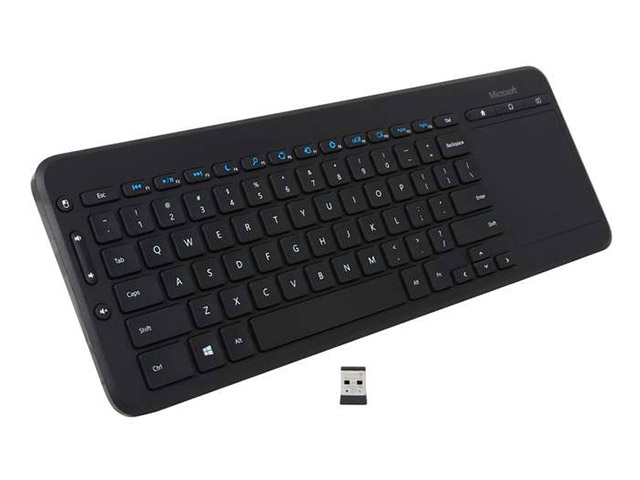 That aside though, there’s quite a bit to like for PC and notebook users too (especially if the latter are docking their notebooks at their desk). Before I get ahead of myself though, let’s start at the beginning, with the key press itself.

This has a nice depth and firmness to it, making typing on it feel like a more tactile experience. The keys, while a little close together, don’t feel entirely too cramped, and generally I had no problems with unintended keypresses. I have to point out that some keys are undersized – most notably, the backspace, caps and tab keys.

The reason for this is without a doubt to cater to the nice, square and roomy trackpad integrated into the keyboard’s base on its right hand side. This is not just terrifically responsive, it’s also a pretty good stand in for a mouse, and quite a bit better than the average trackpad typically found on notebooks. It’s clickable, meaning there are no separate mouse buttons. This was a definite pro in the keyboard’s favour. 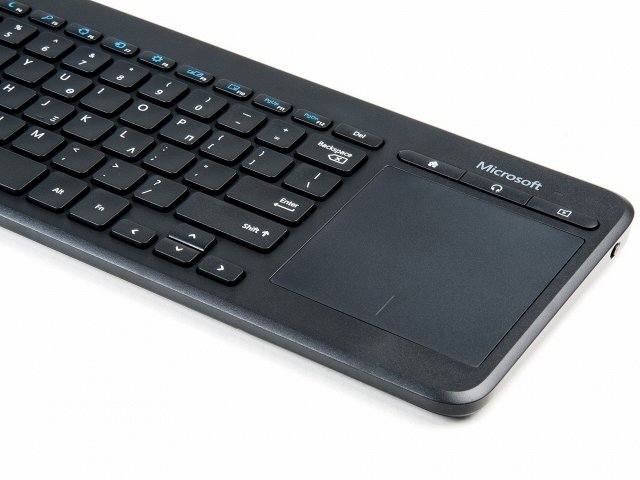 Alas, backlighting is not featured here (why Microsoft, why?) which is as always a pity. It’s also a strange decision, since the similarly sized Logitech K810 manages to include it.

For a keyboard bedecking itself with the media moniker, you would expect to see an abundance of media controls placed front and centre. Oddly enough, you don’t exactly get that here. Sure, there are separate buttons for volume control on the left hand side, as well as a dedicated button to switch media output to your headphones.

However, keys for playing, pausing and advancing tracks are relegated to the thin row of function keys spanning the top of the keyboard. It’s almost as if media control was an afterthought here.

The tiny, included Bluetooth dongle (very easy to lose if you’re not careful), and the responsiveness between my computer and the keyboard was quick and nearly instantaneous, and on that front I had no complaints. Otherwise, the keyboard has no other frills to speak of (an integrated USB port would have been welcome).

If you are looking for something light, portable and which enables you to forego the mouse for general computing task, then the Microsoft All in One Media Keyboard is worth considering. If however, you require backlighting, want a Bluetooth keyboard that can work with iOS devices and that is of a similar size, I would suggest you rather look at Logitech’s offering instead. The All in One Media Keyboard has a RRP of R470.