Philips OneBlade vs Razors vs Shavers

The Philips OneBlade concept is an intriguing one, falling somewhere between the traditional razor and a modern electric shaver. Would you be better off with the OneBlade compared to the others? We put it through its paces to find out.

Looks and handling wise a traditional razor and the OneBlade are quite similar, but mechanically they work quite differently. While a razor blade slices beard follicles, the OneBlade provides a cutting action as two fast moving cutters work much like scissors, chopping at 200x per second.

The one big difference that is immediately noticeable, is that the OneBlade simply does not shave as smoothly as a razor, since it cuts at a slightly raised position. There's both good and bad to this. For those who are used to a silky-smooth skin after a shave, or are blessed with a five o’clock shadow, the OneBlade might be problematic, simply because your stubble will be left ever so slightly longer after a shave. 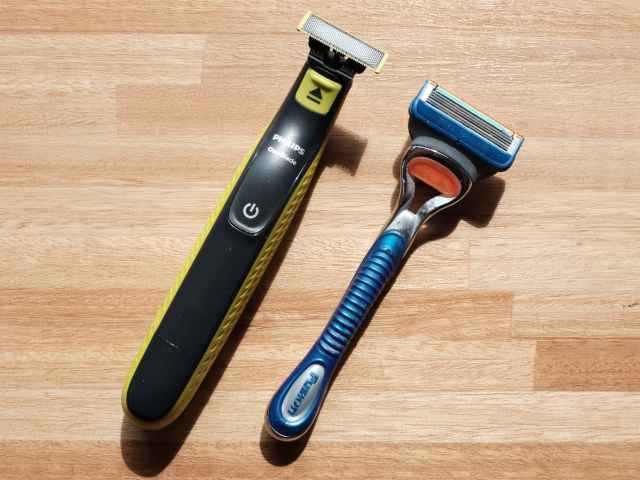 The benefit comes for those with sensitive skin or who suffer from in-grown hair. Since the OneBlade doesn't shave close to the skin, these problems tend to not be present. For general appearance, both in the office and out, the fact that the OneBlade doesn’t cut as smoothly as a razor didn’t concern me, although I don’t have a particularly fast-growing or dense beard.

Another plus counting in the OneBlade’s favour is that you can shave either wet or dry, with dry saving both time and water in the morning. I preferred dry; just make sure you do so over the basin because stubble tends to get everywhere. Using the OneBlade I had to shave a few times over the same spot to get all the growth and to make sure it’s smooth. In general, however, using the OneBlade in the morning is a quick and painless process.

The OneBlade, much like a razor, also needs to have the head replaced, although not as often. Philips pegs the life of a blade at four months, which sounds a lot until you read the small print which states this is based on two full shaves a week – not a lot.

Finally, you never need to charge a razor, which you do need to do with a OneBlade, although it gives a decent run time of 45 minutes, with an eight-hour charge.

The price of razors, of course, differs widely, depending generally on the amount of blades per head. Three blade replacement packs of four ranges from about R175, with four blade packs going for about R300. OneBlade replacement heads retail at R250 for one, or R450 for two, with the price of a OneBlade starting from R500 to R900.

I’m a shaver guy, keeping one in the car and shaving while sitting in traffic; it’s a convenience that has seen me not using a razor in ages. Taking that into account, a big benefit a shaver has above the OneBlade, is that it retains your stubble when shaving. Grooming with the OneBlade is a messy business, with stubble falling where it wants if you are not having a wet shave. This means you are restricted to the bathroom when taking a shave. 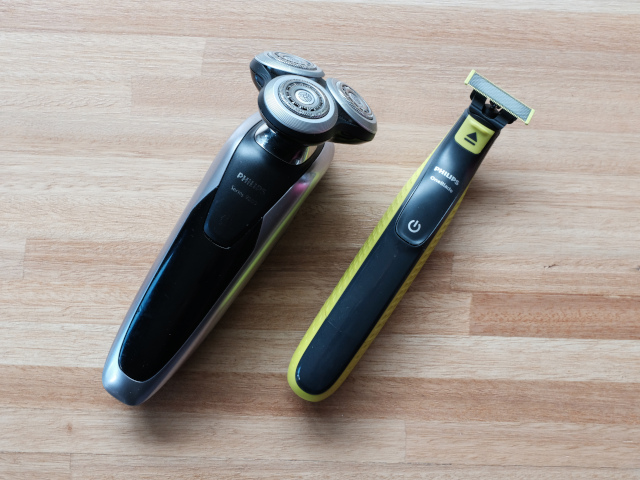 As you move up in the shaver price range, they start offering little pop-up beard trimmers (or head replacement trimmers in some cases). While working mostly fine, the OneBlade has been designed with beard trimming and shaping high on the agenda. With cutting taking place at both the top and the bottom of the blade, it’s easy to start shaping your beard (or trim your nose-hairs), while Philips also provides different sized stubble combs to make sure you get the exact stubble length you need (more stubble combs provided in the more expensive OneBlade packs). This is a massive plus for the OneBlade, which makes it a no-brainer for those looking for the perfect beard/stubble shape.

From my experience, shavers, much like razors, cut closer to the skin than the OneBlade, and this counts for both foil and rotary shavers. However, it can also lead to skin irritation around the neck, a problem I've not picked up with the OneBlade.

In terms of the cash you need to dish out, a shaver will be a purchase that will last quite a long time depending on the model you buy. I’m still shaving with a 2015 model, although I don’t shave that often being able to work from home, even before the lockdown. If you have a foil shaver, the general recommendation is to replace the foil & cutter block every 18 months, with a rotary head about every two years. 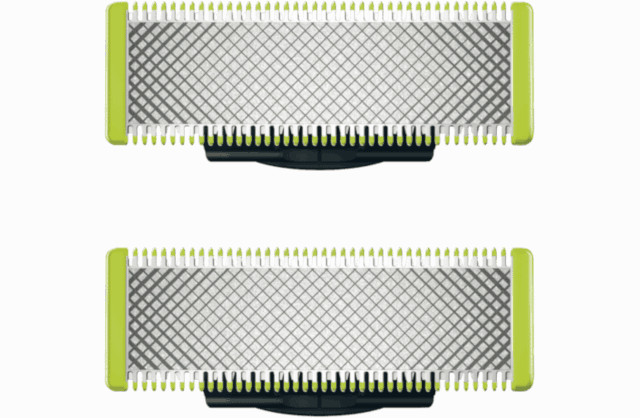 The OneBlade needs replacement blades every four months (more if you shave every day), which will cost you R250 for one, or R450 for two. The Philips OneBlade retails between R500 and R900 depending on the version, with variations on battery capacity and the amount of stubble combs included. You are actually able to pick up a decent shaver from about R500 or less if you’re not that picky, although the better ones go for more.

Update: During lockdown it became apparent the OneBlade is more than capable of shaving long beard growth, which shavers and razors really struggle with. If you have grown a beard during this time period, get yourself a OneBlade.

The Philips OneBlade beard sculpting ability puts it in a level above a razor and shaver. It might not shave as close, but you also don't tend to get skin irritations afterwared. With the OneBlade you still need to groom close to a basin, which cuts down on usability compared to a shaver. However, shaving is quick and easy with the OneBlade and it will leave your face smooth enough, at least till the afternoon.

PROS
Quick and easy shave, Wet or Dry, Sculpting abilities a big plus

CONS
Doesn't shave as close, You need to be next to a basin
TAGS:
Philips OneBlade reviewPhilipsOneBladeshavers
USER COMMENTS