No matter how advanced smartphone become, it can’t really match the comfort of answering calls on a refined telephone, and this is where accessories such as the Moshi Moshi 03i (MM03i) wireless Bluetooth telephone for iPhone (video posted below) comes in.

Boasting an elegant and stylish design by renowned French designer David Turpin, it offers a  modern and sleek look that is finished off in a black high-gloss plastic texture. On equal footing with its design is its use of modern technology, equipped with high quality speakers and microphones as well as support for Bluetooth 2.1 multipoint technology.

The latter allows users to pair it with and answer calls on two different Bluetooth-enabled devices, meaning that the user is able to connect the handsets to two phones, or to a smartphone and a Bluetooth-enabled notebook for instance, so that you’ll be able to receive phone calls over one and make VOIP internet calls via Skype with the other.

You charge it via a two-point power adapter, but you can also employ the provided microUSB to USB cable to charge it via your PC or notebook. The handset has an LED light on it to indicate when it needs to be charged (blinks red), while the device will also beep when power is running low.

In order to charge the handset you simply place it back on the base, where a white LED light on the lets you know whether it’s charging properly and ready for use. 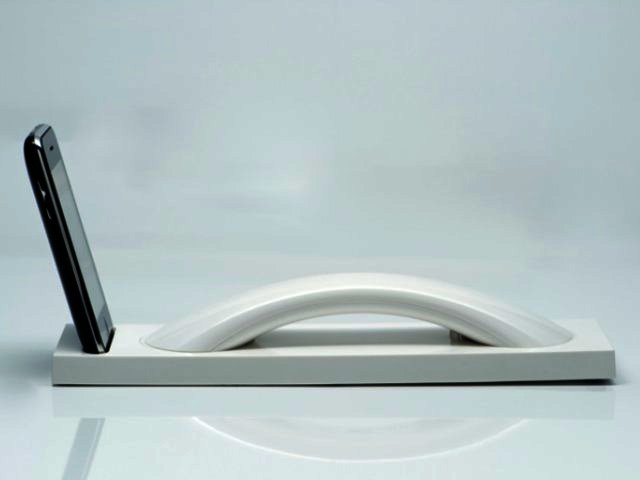 Once charged (takes two to three hours to fully charge the build-in battery) and paired with your smartphone, you’ll be able to make and receive calls, and we found that voice quality was excellent due to the use of a high quality microphone and speaker. The MM03i offers users the convenience of traditional telephone hardware, without losing the benefit of being able to move around the room due to its use of wireless Bluetooth technology.

Voice-dialing is supported, so by simply holding the Volume + button on the phone for two seconds, you can simply say “phone” along with your colleague or friend’s name and your iPhone will dial their number, using the voice tags you stored on the iPhone. As with the native feature on the iPhone 4 itself, it is a bit of a hit and miss affair, with the phone dialling Mr. Japhets, instead of Jacques for instance.

Besides the Volume + button there’s a Volume - button to set the volume lower as well as a multi-function button, enabling you to accept/reject incoming calls, end active calls or activating other functionality such as redialing the last number that you dialled (double press).

The MM03i allows you to charge your iPhone whilst your smartphone is plugged into the MM03i’s integrated dock. There’s also 3.5 mm audio jack at the back of the device, which you can use to plug in your external speakers or a headset, allowing you to listen to music stored on your smartphone.

According to Native Union, manufacturers of this device, another benefit is that studies have shown that the MM telephones reduces radiation emanating from your smartphone by 96%. There’s no way to easily test this ourselves, plus the jury is still out on how harmful cellular radiation truly is, but we suppose this benefit is not a bad thing.

Native Union’s Moshi Moshi 03i contemporary handset is as comfortable to use as any contemporary telephones of yesteryear was, but boast some trendy, modern looks and functionality. It is available for a somewhat pricey recommended retail price of R1299 from Gammatek. For more info visit http://www.gammatek.co.za or phone 011-201-0800.

Ergonomic and trendy design, great voice quality, connect to two Bluetooth-enabled devices at the same time, charges your iPhone while it is connected.

Expensive and a bit of a gimmick.

PROS
Ergonomic and trendy design, great voice quality, connect to two Bluetooth-enabled devices at the same time, charges your iPhone while it is connected.