Last month we employed Swiss Charger’s iPower cover for the iPhone 4, a protective cover/battery pack, to almost double the battery life of our iPhone. Now we put a similar product, SaFPWR’s Fusion rechargeable smart battery case for the iPhone 4, to the test. Is it capable of extending the iPhone 4’s battery life, beyond the time it takes to say its extremely long name?

The Fusion case also includes four LED lights on the back, indicating the remaining power level of the built-in battery, as well as a button that you can press to select either standby or charge mode for the case’s battery. The latter is the only design element we didn’t like so much, as it would have been more convenient to have that button and lights at the front of the cover, but this boils down to personal taste. There is also no screen protector or kickstand included, which were present with the iPower.

As is the case with the iPower, the bottom part of the Fusion case also clips into your iPhone 4’s proprietary connector, meaning you have to make use of a micro USB cable to USB cord to charge your device. One is provided in the box and you can use it to connect the iPhone to your PC to sync content via iTunes and charge the device via USB. You can also clip this cable into the USB end of your iPhone 4’s two-point power adaptor in order to charge your smartphone (as well as the cover’s built-in battery) via the wall socket.

Power users and social networking junkies tend to leave the Wi-Fi connectivity, email, Facebook and Twitter apps, always on and running in the background. This normally results in your iPhone 4’s battery lasting about a day. As with the iPower case, SaFPWR’s cover boasts a built-in lithium polymer battery. This 1500 mAh battery is not only bigger in capacity than the iPower’s 1400 mAh built-in lithium-ion battery, but also bigger than the iPhone 4’s own standard battery (Litium-ion polymer 1420 mAh).

During our tests the iPhone’s own battery remained at 100%, whilst making use of the built-in battery of this charger. It did so from 07:30 in the morning until 11:00 the following day, amounting to around 27½ hours, which is quite a bit longer than with the built-in battery of the iPower. From then on the iPhone relied on its own battery, which lasted from 11:00 until 13:20 the following day, approx. 26 hours and 20 minutes.

The grand total (SaFPWR’s built-in battery + the iPhone’s 4 own battery) comes to 53 hours and 50 minutes, which is a couple more than the 51½ hours of the total of the iPhone and iPower cover pairing. It must be noted though that only a couple of calls were made during the tests for the iPower, a lot more calls were made and received whilst testing the Fusion cover, so it might have lasted a little longer. 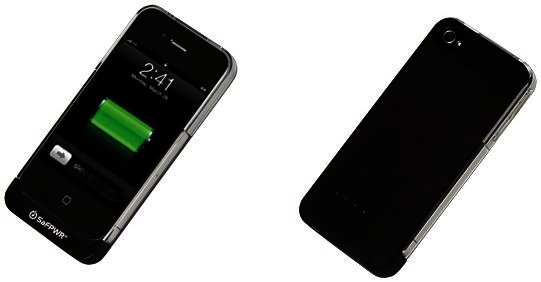 Protective covers with built-in batteries, such as the iPower and Fusion, are very convenient in that they allow you to charge your iPhone’s battery whilst on the go. The problem that emerges from this is that lithium-ion batteries have limited amounts of charging cycles.

By employing these kind of covers you will then add a significant amount of charges, possibly even double your charges, meaning that your battery might not last as long as it would have, had you mere utilised your iPhone’s wall socket charger to charge it.

The company claims that its patented Energy Management Technology (EMT) will enable the battery system to communicate with your iPhone to discharge power only as needed and adapt to your mobile device’s changing energy demands. This will result in the prolonging in the lifespan of your iPhone 4’s internal battery. Whether this is true or not we don't really know, since there isn’t really an easy way to truly put this to the test.

SaFPWR’s Fusion rechargeable smart battery case for the iPhone 4 doesn’t just protect your iPhone, since it will also function as a source of power when your iPhone’s internal battery is almost depleted, in many cases more than doubling battery life. Beyond that, this smart case will also conserve the lifespan of your iPhone’s battery via its smart Energy Management Technology.
It is available for a recommended retail price of R599 from SaFPWR, which makes it more expensive than the iPower. You can visit its local website for more info.

Con
No screen protector or kickstand included, more expensive than the iPower and placing of the power button on the back of the cover.

CONS
No screen protector or kickstand included, more expensive than the iPower and placing of the power button on the back of the cover.
TAGS:
iPhone 4 accessoryiPhone 4 protective coverSaFPWR
USER COMMENTS