Samsung’s Galaxy Note 3 is the company’s third Note; it is also its best phablet, if not finest smartphone, to date.

The Galaxy Note 3 differs from its predecessors in a small, but immediately noticeable respect. It’s both taller and narrower, fitting more easily into the hand, immediately evoking a sense of it being a larger Galaxy S4. Additionally, it is also quite a bit lighter (15 g) than the Galaxy Note 2 at 168 g, making it strangely enough feel somewhat less unwieldy than its predecessors, despite having a larger 5.7" screen.

Speaking of its display, the Galaxy Note 3’s full HD (1920 x 1080) Super AMOLED screen is magnificent, a real invitation to the eyes, thanks to the fact that it boasts 381 ppi (pixels per inch).

Also aiding the general usage of the device is the fact that it runs on Android 4.3, with general tasks working, quite literally, as smooth as butter. For a bit of a snapshot of just how fast and smooth the Galaxy Note 3 performed, one only needed to look at its benchmarks. It scored a staggering 34 739 in AnTuTu (nearly triple the score achieved by the speedy Galaxy Note 2, and even surpassing the Galaxy S4’s respectable score of 28 158). It also raced past the competition in Smartbench 2012, delivering a total Productivity plus Games Indexes score of 12 533, considerably better than the HTC One’s 9783. It is still though trumped by Sony’s Z1 combined score of 13 803.

This is largely due to the processor under the hood. In our review model, this was the Samsung Exynos (5420) Octa-core SoC processor with four A15 cores running at 1.9 GHz per core and four A7 cores clocked at 1.3 GHz each, along with the onboard 3 GB of memory. That should deliver spectacular performance, and guess what? It does. 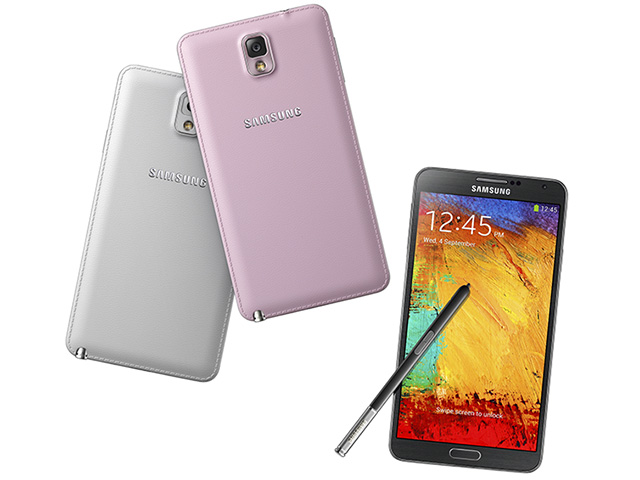 It might not be the all-metal body that we would love to see on a Galaxy Note, but the faux-leather stitching at the back nonetheless feels quite pleasant in the hand. The device's body though, was well compensated for by a screen we couldn't take our eyes off.

One area in which the Galaxy Note 3’s progression over the models was clearly apparent was in the use of the S-Pen. Gone was the annoying lag when using the stylus, and now, drawing and writing with the stylus felt that much more refined than in previous Notes. Also, the S-Pen itself is quite a bit more comfortable to hold in one’s hand; a small, but important detail if you are going to rely on this phablet as your go-to digital notebook.

Also winning us over was the onboard rear camera, which has seen itself similarly improved from the onboard camera found on the Galaxy Note 2. Instead of 8 megapixels, smartphone shooters now have 13 megapixels to play with, with the camera producing impressively saturated and sharp images.

If we had to nitpick though, the only fault we could find with the Galaxy Note 3 was in the placement of its power button on the phone’s right hand side, which people with larger hands may find themselves inadvertently hitting. Also, its price is a wallet breaking R9 000. Otherwise, just like the Note 2, the Note 3 is amongst our top contenders for smartphones of the year.