Guardians of the Galaxy

James Gunn directed Rain Wilson in Super, a low budget vigilante crime thriller about a guy who decides to beat up the bad guys. It followed in the tradition of Kick-Ass and Defendor, giving Rainn Wilson a chance to go darker and deeper, whilst showcasing Gunn's affinity for dark comedy and the paradoxical drama of a self-made superhero.

His ability to convey action and comedy in a ballsy and strangely compelling way, made the oddball director perfectly poised to direct Guardians of the Galaxy. He seized the project with both hands, injecting a Tarantino-fueled passion for the characters and George Lucas scope for setting into the production.

We’re cast into the depths of space as we learn of an American pilot named Peter Quill, known to a few as Starlord, who finds himself on-the-run with his awesome mix tape and a powerful artifact stolen from the tyrannical Ronan. On his misadventures, he runs into a number of would-be enemies, some of which he sequesters to join him. 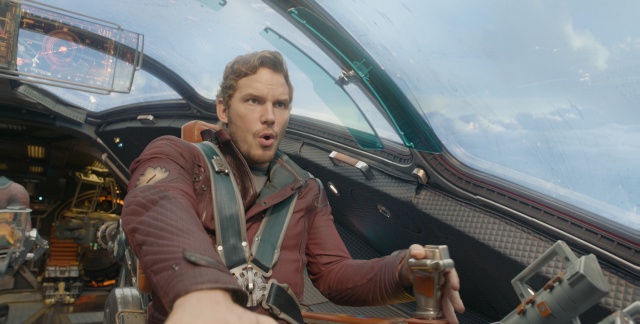 By casting a number of underdogs, Gunn inadvertently gave Guardians of the Galaxy a fighting spirit, turning typical heroes like Bradley Cooper and Vin Diesel into voices for Rocket Raccoon and Groot. In turn, giving Avatar's Zoe Saldana and wrestling superstar Dave Bautista the roles of Gamora and Drax the Destroyer with our charming protagonist Starlord played by the nothing's-gonna-get-me-down Chris Pratt.

The actors give their all: Pratt's mischief drives the tone, Saldana makes a tough-as-nails female character, Bautista is brutally funny, Cooper's snarl sells the lovable Rocket and Diesel gives Groot soul. The Guardians are counterbalanced by some great villains in the Skeletor archetype Ronan, played by Lee Pace (Pushing Daisies) and the psychopathic Yondu, brought to life by Michael Rooker (The Walking Dead).

Guardians of the Galaxy is the sort of film that was designed to succeed through runaway success at the box office or misfire failure thus ensuing a cult legacy. Gunn makes some bold decisions, borrowing aspects from some films and yet setting it apart with its own distinctive comic flavour. If they ever considered a Bravestarr adaptation, Gunn would be hired instantly.

The film's epic intergalactic proportions, motley crew of heroes and mix of bizarre humanoids and alien beings give it a Star Wars dimension. The off-beat sci-fi comedy, larger-than-life characters, eclectic production values and comical scenarios echo The Fifth Element. Glenn Close, the Utopian existence and clash of cultures have parallels with Elysium, while the dark lords, fighter pilot wars and epic earth to space conflict resonate with Robotech. 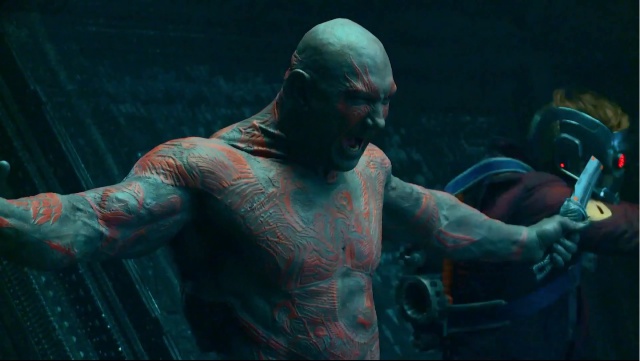 Guardians of the Galaxy's tone is its biggest asset, delivering a mix of nostalgia and laugh-out-loud comedy with plenty of fun and wink-wink action. Just like its lead, it never takes itself too seriously and gives the audience permission to be entertained by the A-Team style camaraderie and team chemistry with a '60s and '70s mix tape soundtrack to keep one foot on the ground and the other one tapping.

While inundated with CGI, the film's world keeps its integrity by making the characters as real as possible through exquisite make up artistry and immersive visual effects. We never doubt what we're seeing or the props the actors are using, whether Rocket is blasting his gun or Groot is hyper-extending his limbs. 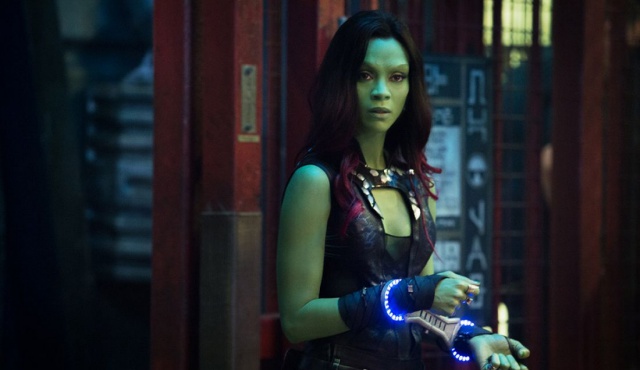 Ironically, Guardians of the Galaxy only really finds its true identity when the team band together. In essence, the process of forming, storming and norming is exciting, yet seems rather cold and distant at first. We're fascinated by the slew of characters, yet wishing we hadn't seen the trailer. Luckily, Gunn kicks the movie into overdrive before too long, forcing the rivals to fight side-by-side, revealing more heart and charm.

By the time the Guardians of the Galaxy jell and realise who they are, it becomes much easier, entertaining and enjoyable viewing as they riff off each other. The classic rock music, cheeky tone, plucky performances, great chemistry and crowd-pleasing action more than make up for a slow start and power the comical superhero shenanigans home with style.

PROS
Rag Tag Team of loveable characters; Great chemistry between all the Guardians; Strong mix of action and comedy

CONS
A little slow to get things going
TAGS:
MoviesGuardians of the GalaxyMarvel
USER COMMENTS