When rumours of a big screen adaptation of Ernest Cline's celebrated novel, Ready Player One first surfaced a few years ago, it was met with mixed reception. Most were split between another fan favourite being ruined by Hollywood and others optimistic that the genre defining book will finally be brought to life.

To win over the skeptics, directing veteran Steven Spielberg helms the project, with his track record for sci-fi flicks one of the strongest around. Add to that a young up-and-coming cast including the likes of Tye Sheridan (X-Men: Apocalypse), Olivia Cooke (Bates Motel) and Lena Waithe (Master of None), and things looked promising for the film. 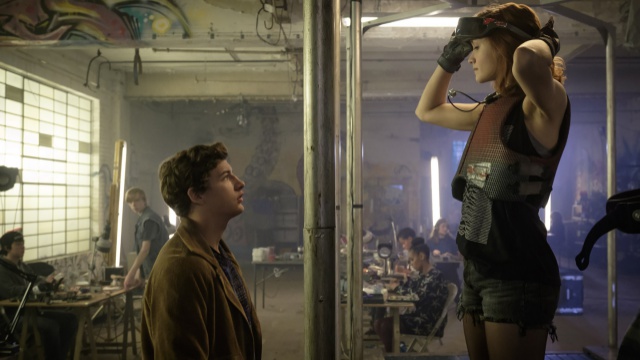 The setting for the movie version of Ready Player One is the not too distant future of 2045, where a young man named Wade Watts (Sheridan) has to contend with the dead end life that he and many of the people like him face. It's not strictly the same as Oklahoma City that's depicted in the novel, instead playing out in Columbus, Ohio for the movie.

The change in name does not have any real effect on how the film plays out, with much of the rest of the plot mirroring the action of Cline's work. To that end, it is still the virtual world of the OASIS that is central to the storytelling, where others like Watts (referred to as a Gunter) try to find three keys hidden by the long deceased OASIS creator James Halliday (Mark Rylance, Bridge of Spies).

Watts' avatar Parzival is nothing like the young man himself, and seems to brim with the kind of confidence that Watts craves in real life. As such, Spielberg has done a good job of showcasing just why the OASIS is so important to so many in Ready Player One, not just for its ability to bring imagination to life, but also to empower an otherwise disenfranchised community of users.

With the 2045 Columbus depicted in the film looking as derelict as it does, it's clear to see why almost everybody chooses to spend their time in the OASIS to try and escape reality.

For viewers part of the allure of Ready Player One will be the pop culture references littered in almost every frame of the film; from characters from games and movies of old, to a soundtrack that is lifted straight from the 80s. As such, those wanting a bit of nostalgia will certainly get their fix from Ready Player One.

Without giving too much away, there are several memorable references of note, such as Goro from Mortal Kombat having a Xenomorph burst through his chest, as well as Chucky from Child's Play being weaponised in battle. Perhaps the best one goes to Stanley Kubrick's adaptation of The Shining, which is one of the levels that the Gunters need to pass in order to attain a key.

While we appreciated many of the references, it was quite hard at times to keep up, especially in the larger battle scenes. It may even be a tactic from Spielberg to place so many Easter Eggs in Ready Player One that pop culture aficionados will be forced to watch the film a few times in order to get them all.

While Ready Player One is great way to spend two hours at the cinemas, it may not be as faithful an adaptation as some Ernest Cline fans may have been hoping for. The sense of hopelessness in 'The Stacks' of Columbus, Ohio is not fully brought to fruition, with escaping to the OASIS feeling a bit too easy. The protagonist organisation of IOI and its leader Nolan Sorrento (Ben Mendelsohn, Rogue One) never seems to pose the life or death threat that they should for Watts and his High Five team and Gunters.

Where the film cannot be faulted though is the stunning CGI work that Spielberg's team has created for Ready Player One. The different virtual worlds are immensely rich and detailed, the expressions and emotions of avatars in the OASIS come through expertly on screen and the action sequences are quite epic.

For its pure escapism value, Ready Player One is hard to beat, but one can't help feel like a deeper narrative could have been created, focusing a bit more of The Stacks and the real world.