Lexus has showcased its all new, third generation IS sedan in the form of the sublimely styled IS 350. With this vehicle, the luxury Japanese car brand hopes to send local executive compact saloon buyers on a detour from their nearest Mercedes-Benz, Audi, or BMW dealerships.

The new IS 350 is 80 mm longer than the outgoing model, 10 mm wider, and the wheelbase has been extended by 70 mm compared to its predecessor. The latter has contributed to the rear seat space for passengers being boosted as well as the luggage capacity of the boot being increased.

At the front of the car, buyers will now find the new family face of Lexus, which is the same kind of spindle grille found on the IS’s stablemates - the GS and LS ranges. According to Lexus, the grille design has been made more three-dimensional, whilst its shape has been accentuated by a chrome plated frame. The grille is flanked by headlamp clusters that feature the company’s L-shaped LED Daytime Running Lights.

Lexus’ new IS is equipped with 17" aluminium wheels one the E and EX variants as well as 18" aluminium wheels for the F Sport model. The compact luxury sedan is available in a range of nine exterior colours, three of which are exclusive to the F Sport, with these being Nova White, Electric Blue and Sonic Titanium. 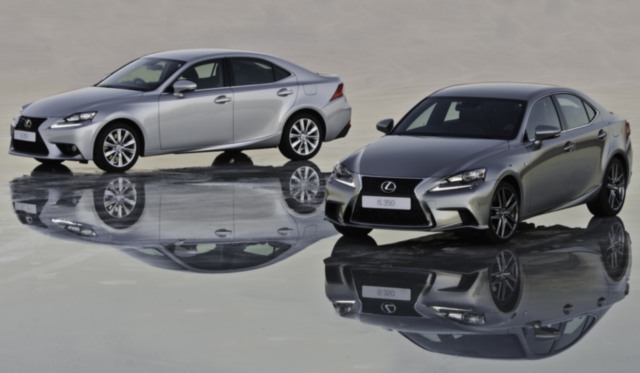 From the outside, the new IS 350 is almost as sporty in appearance as the IS F performance sedan.

The new interior of the IS 350 is available in a choice of three leather colour schemes, namely Black, Ivory, and Dark Rose, with the latter being an F Sport exclusive. For the first time, Lexus has incorporated electrostatic switches in the centre console, to control the air conditioning temperature with a simple touch or swipe.

This system also incorporates an onboard satellite navigation system. On the upper zone drivers will access a 7" multi-display screen that, amongst other, displays album cover art of the music being listened to. Thanks to its eight speaker Premium Sound System that sports a fully digital, Class-D 8 channel amplifier, the audio experience is first class in the new IS. 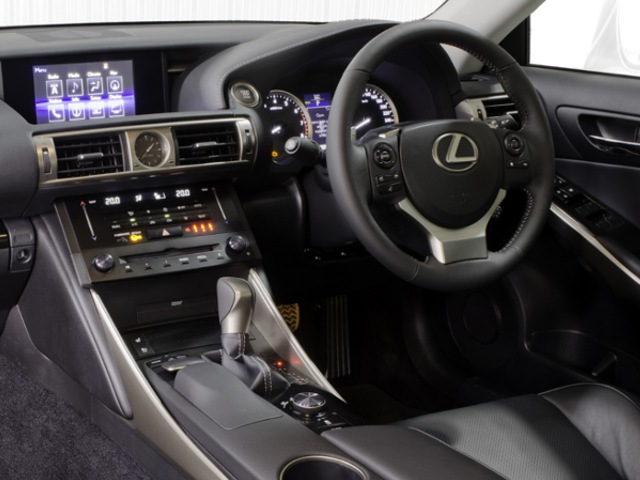 The interior is a stylish rendezvous of clever ergonomics, comfort, technology, sportiness and luxurious materials.

All of the new IS models boast the same powerplant under the bonnet, namely a 3456 cc V6 petrol engine that sports direct and port injection, and dual VVT-i (Variable Valve Timing-intelligent) technology to augment engine performance while cutting down on fuel consumption.

This engine cranks out 228 kW at 6400 RPM and 375 Nm of torque at 4800 RPM, accelerating the IS 350 from standstill to 100 km/h in under 6 seconds. The terminal velocity of the new IS 350 is 225 km/h, with more conservative drivers being capable of obtaining a combined-cycle (town and highway driving) fuel consumption figure of 9.7 litres per 100 km.

All of the new SA-spec IS models come equipped with an 8-speed, Sport Direct Shift (SPDS) automatic transmission, which allows drivers to manually shift gears via paddle shifters, when the car is in Sport mode.

In other motoring related news, Volkswagen South Africa has announced the local availability of the new, seventh generation Golf GTI.