If you're gonna colonise a new planet, you have to take a lot of stuff up into space with you. This is the motivation behind SpaceX's latest launch of the Falcon Heavy rocket. SpaceX founder Elon Musk has long touted his desire to colonise Mars, and having a rocket capable of carrying large payloads, as well as being reused for multiple trips, is the first step in trying to do that.

To that end, the Falcon Heavy rocket that reached orbit after launching from Cape Canaveral in Florida yesterday, is capable of handling a load of up to 64 metric tons, according to Space X. To put that in perspective, it can handle a mass greater than a Boeing 737 airplane filled with passengers, luggage and fuel.

We're still a few years off before Falcon Heavy rockets help establish colonies in space, but yesterday's launch did include a special payload of sorts - Elon Musk's red Tesla roadster. There was a live cam from inside the vehicle, with its roof down of course, showing a mannequin in a space suit, as well as a placard with the words "Don't Panic". This, for Douglas Adams fans, is a nod to The Hitchhiker's Guide to the Galaxy series.

Along with sending a Tesla Roadster into space, the launch also saw SpaceX successfully return two of the Falcon Heavy's cores to Earth, landing safely on a platform and ready to be reused. The centre core, however, did not make as steady a decent, failing to land correctly on one of SpaceX's drone ship platforms. 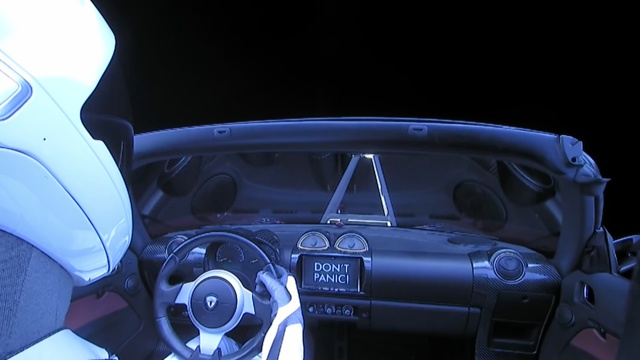 When the Falcon Heavy, and Musk's car reached the desired orbit, it was placed in an igniter-less 'coast' phase to further test the capabilities of the rocket. According to a tweet from Musk, both the rocket and car are now headed on a trajectory that will take them past Mars, before being pulled back towards the Sun.

If you've got 35 minutes to spare, check out SpaceX's video of the launch below.