Alcatel had a couple of interesting devices on show at Mobile World Congress this year, but nothing that really spoke to consumers looking for a flagship device. That changed today, however, as the company has showcased its latest offering - the Alcatel Flash.

What makes this smartphone so intriguing, is the dual camera setup that features both on the rear and up front, as well as 10 cores powering the device. Other elements include a 5.5" Full HD display (1920x1080), along with a fingerprint reader, dual SIM orientation and 3 GB of RAM.

More detail of the CPU reveals a Helio X20 dexa-core chipset, that's split between a 2.3 GHz dual-core and a pair of quad-core CPUs clocked at 1.9 GHz and 1.4 GHz respectively. The Alcatel Flash is also running Android 6.0 (Marshmallow) and only comes in a 32 GB onboard storage model (microSD slot for an extra 128 GB). 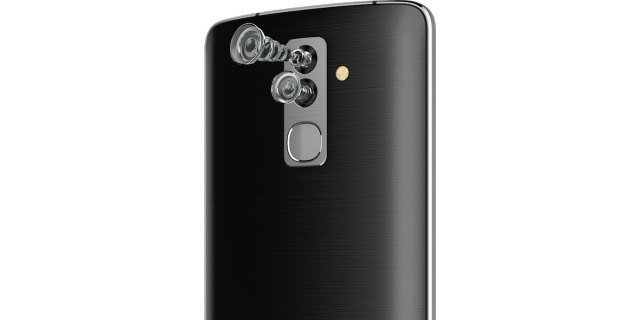 Shifting focus back to the cameras. The dual lens on the back is 13 MP, with one being monochrome and the other RGB in nature. It's a setup similar to the Leica-certified Huawei flagship devices, but whether it can deliver a similar shooting experience remains to be seen. On the front, the dual camera is made up a 8 MP and 5 MP lens, with the latter used for depth of focus effects.

With Alcatel touting a pair of dual cameras as a world first for smartphones, it could an option worth checking out, especially if it comes in at a decent price. At this stage though, Alcatel South Africa has not confirmed whether the Flash will be landing in the country, so watch this space.