The ROG Zephyrus Duo 15 integrates two displays in an ultra-slim form factor to bring a new dimension of versatility to premium gaming laptops, without sacrificing any of the high-powered performance that defines ROG.

Multi-monitor arrangements enable gamers, creators, and power users to work more effectively on their desktops. Laptop users are also commonly seen using their phones as a second screen. To make that level of productivity portable, the Zephyrus Duo 15 doubles down on displays with an elegant Active Aerodynamic System (AAS) Plus design that makes the full-width ROG ScreenPad Plus touchscreen an integral part of the cooling system.

As the AAS Plus system tilts the laptop up, the second display also rises for comfortable viewing, while revealing a large air intake for deep airflow. According to the company, the "sophisticated cooling design gives Zephyrus Duo 15 ample thermal headroom to fit powerful flagship processors in a groundbreaking multi-screen gaming laptop."

ROG explained that adding another display is no simple endeavor for ultra-slim gaming laptops, where every millimeter matters. The screen must be large enough to show useful information yet close enough to be within easy reach. 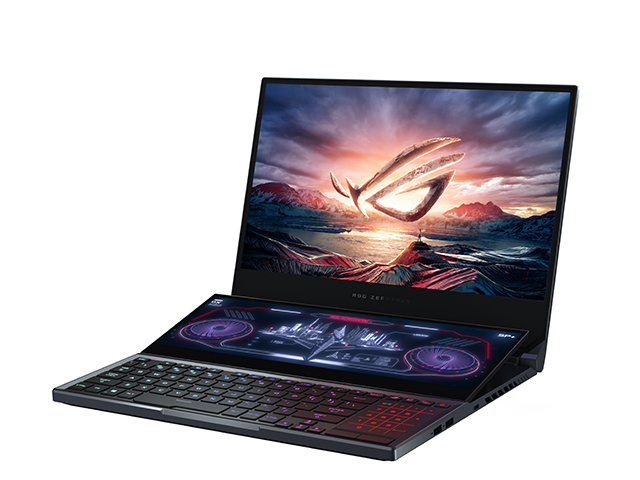 As the laptop is opened, ROG ScreenPad Plus tilts up at a 13° angle for comfortable viewing and touchscreen interaction. This fluid motion is carefully choreographed by a custom hinge that staggers the rise of the displays to prevent damage. To prevent the screens making contact as the lid opens, the hinge incorporates curved sliders that delay the deployment of the secondary display.

In terms of sheer power, the notebook boasts up to an 8-core 10th Generation Intel Core i9 CPU with speeds of up to 5.3 GHz on a single core and up to 48 GB of combined onboard and SO-DIMM memory,

As for storage, you get two NVM Express PCIe x4 SSDs that run in RAID 0 to provide plenty of high-speed storage, with up to 2 TB of capacity. That should be enough for  gamers and creators to take their entire game library and professional portfolio wherever they go.

Beyond the hardware inside, USB Type-C (USB-C) with Thunderbolt 3 offers versatile connectivity for a wide range of powerful accompaniments. Gamers can hook up to high-speed storage for ultrafast multimedia editing and transfers, speed up gaming and rendering by plugging into external graphics, daisy-chain multiple monitors to augment the integrated displays, or connect to a fully equipped desktop dock with the simplicity of a single cable.

Display wise, the company hasn’t held back here either, with the Zephyrus Duo 15, sporting a high-resolution 4K UHD display.

Also onboard is the new NVIDIA GeForce RTX 2080 SUPER, which, along with advanced cooling and ROG Boost, can hit peak clock speeds as high as 1330 MHz in Turbo mode.

Asus asserted that "the Zephyrus Duo 15 squeezes power and premium features into an impressively slim body that’s just 20.9 mm thin and weighs only 2.4 kg, packing a high-capacity 90 Wh battery." The laptop can also charge via USB Power Delivery, so users can take care of lighter work with a 65 W USB-C adapter that’s much smaller than the standard unit required for full performance. If the battery runs low and there's no free socket available, users can buy time by charging from a compatible USB power pack.

In short, on paper at least, the latest notebook looks like it has gone beyond an ‘everything but the kitchen sink’ approach to packing in the refrigerator, oven, dishwasher, large screen TV and couch to boot in a portable package.

The only hit you will take here is the price – at R90 000 this is a Far Cry from being cheap. If however, you have to have the Maserati of gaming notebooks, you can unite with your dream machine at Evetech.co.za