For any of you unfamiliar with Ex Machina, it's an indie film written and directed by Alex Garland, and deals with the notion of artificial intelligence on a psychological/thriller level. Yet to make its official debut in local cinemas, Ex Machina has been promoting itself at SXSW, the Texas-based music and film festival. Being an indie film, Ex Machina does not have the big publicity budgets of other sci-fi films out there, as such a little innovation is required. To that end, Ad Week has stumbled across a LinkedIn profile for the film's humanoid AI robot, Ava (played by Alicia Vikander). 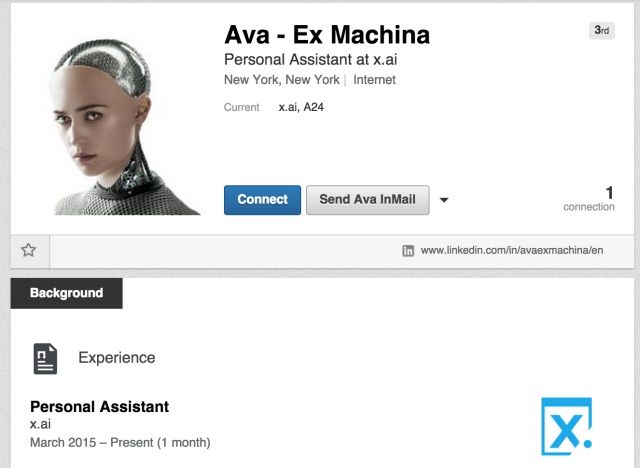 The profile advertises Ava as a personal assistant, and is the cumulitive efforts of the film's distribution company A24 Films and x.ai. The latter is a relatively small personal assistance startup, that designed a service known as Amy to aid people organise their lives (think of it like Siri or Cortana, but with a far more human feel). Those interested in Ava's services can check her out on LinkedIn till the end of April.

This most recent move by A24 Films is one of two identified by Ad Week, as a Tinder profile for Ava was found doing the rounds at SXSW last week. Given the fact that Ava's character is both alluring and achingly beautiful, she has garnered quite a bit of interest, with her own Instagram account thrown in for good measure.

With Ex Machina set to land in cinemas in coming weeks, click on the trailer after the break.