FanCon 2019 waiting for all Cape Town geeks this weekend

The premier geek event in the south is happening this weekend, with FanCon Cape Town Comic Con kicking off in the Cape Town Convention Centre this Saturday. It’s difficult to believe that this is only the fourth FanCon ever, since it’s pretty much locked down as a must-attend on fans’ calendars. This year is going to be another good one, with great guest, cosplay comps, the artists alley, geek merchandise and of course panel discussions to fill up the weekend.

The panel discussions are always lively and informative, and a few that we have our eyes on include:

The Art of Watchmen and Judge Dredd: An interview with British comic book legend John Higgins

Higgins is noted for his 20 year stint on Judge Dredd and as the colour artist on the world’s most acclaimed graphic novels, Watchmen and Batman The Killing Joke. This one right here is not to be missed under any circumstances.

Bitterkomix is included in the 1001 Comics You Must Read Before You Die, so seeing them chatting about this NB part of the local comic book scene is going to be amazing.

Batman: 80 years of The Dark Knight

2019 is of course the Caped Crusader’s 80th, and this panel sees  Brian Stelfreeze, John Higgins, Sam Humphries, and Jason Masters, all comic talent who have worked on Batman at  some stage of their careers.

If you want to start your own strip or even just want to enjoy comics more, this is it, with Brian Stelfreeze, Sean Izaakse, Loyiso Mkize, Jason Masters in the panel, and moderated by old TechSmart contributor Moray Rhoda.

The Power of Satire: Cartooning Around

Celebrated cartoonist, Zapiro, with Anton Kannemeyer and Conrad Botes, discuss and debate the power of satire in cartoons and comics within the context of South African culture and society.

Want to know what it takes to become a comic book writer? Humphries is your man, being the current writer of Harley Quinn, Dial H For Hero (DC Comics), Blackbird (Image), and Goliath Girls (Comixology), plus he has an extensive previous body of work for DC, Marvel, Image and Boom Studios.

The Rise of the African Super-heroes 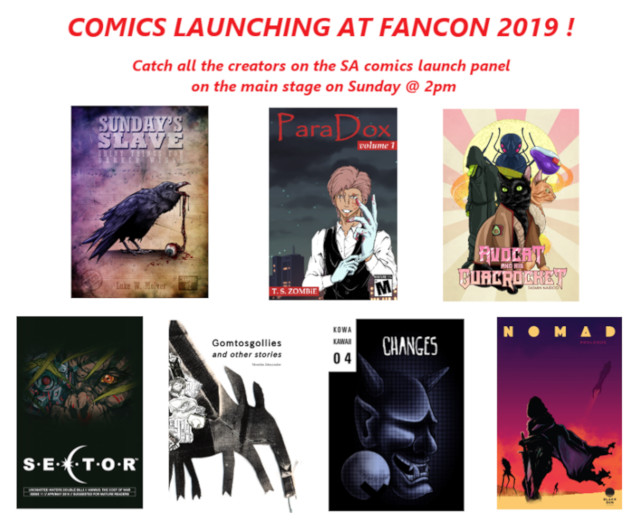 That is surely enough to fill up your brain as well as your weekend, but wait, there’s more. There’s also a bunch of comic books launching at FanCon 2019, which you would also be able to buy. One of our favourites is Sector, with #11 making its debut. Also coming is Tafadzwa Shumba’s Paradox Vol.1, Danielle Albertyn’s Kowa Kawaii #4 and Luke Molver’s Sunday’s Slave #2, amongst a whole heap of others.

The programme guide for FanCon 2019 can be found here, alongside the panel programme. If you’re into your cosplay, you can find more info on Sunday’s competition here.

FanCon 2019 takes place in the new wing of the Cape Town International Convention Centre, called CTICC 2. Both Saturday and Sunday stretch from 10 am - 6 pm, with tickets going for R150 per day, available at Computicket or at the door.