No matter how you slice it, Konami's PES has always played second fiddle to EA Sports' FIFA. In recent years, that has changed somewhat, particularly as Konami has nailed the on-pitch gameplay. It is off the field, with regards to licensing and online leagues, where FIFA has held the edge, and ultimately been superior overall.

The latest iteration of Konami's football game, PES 2017, is set for release on 13 September. While we haven't played the fully fledged game yet, we did spend several hours on the demo, which made its way to the PlayStation and Xbox stores recently for free download.

This then, are five things we picked up on, and while far from a full review of PES 2017, certainly shows which direction the game is heading in. 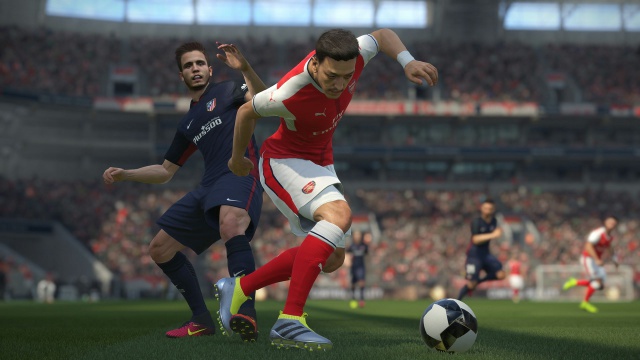 There are a handful of teams to utilise in the PES 2017 demo, all of which are fully licensed. As such, the majority of players will look like their real-world counterparts. In this respect, Konami has done a stellar  job. Player's faces and facial expressions look highly detailed, and they really nailed the hair. Paul Pogba for example, has his surname on the side of his head, along with a red streak of highlight, making him look exactly like he did during the 2016 Euros.

Added to this, the instant replays following significant attempts on goal or the dishing out of cards for fouls, look superb, with a high degree of detail. The real test, however, when the proper PES comes out, is whether Konami has made non-licensed teams and players look as good.

Perhaps ‘smarter’ is the wrong word, but goalkeeper gameplay during the PES 2017 demo felt more like their real world counterparts. For example, should you make a storming run into the 18-yard area, the keeper will wait to charge at the very last minute, looking to block shots by any means necessary. In FIFA for example, a similar run would simply result in keepers going to ground and instantly snapping up the ball, which rarely happens in real football.

Their distribution, particularly out of hand is also better. If a player is close by, the ball is simply rolled underhand to them. When a bit more velocity is required, keepers will wind up a fling the ball 40-plus metres overhand with ease. On the whole, goalkeepers play far better on PES 2017. 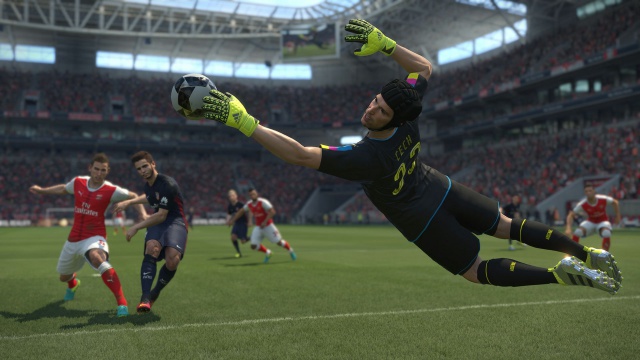 One of Konami's big improvements for PES 2017 is Real Touch and Adaptive AI. The former comes into play when receiving passes, and specifically adjusts according to the weight of pass and skill level of the player in question. It also provides the opportunity, should you be deft enough, to quickly turn away from oncoming defenders and fire shots away.

The Adaptive AI was surprisingly good too. If, for example, your deepest lying midfielder was used to initiate attacks and pass the ball the majority of the time, the opposition midfield would begin to press as soon as that player received the ball. This forces you to quickly hit diagonal passes out wide to wingers or overlapping fullbacks. It also worked vice versa, if our game plan was to shift possession out wide, the opposition defence would look to cut passing lanes.

As such, it appears PES' AI is very intelligent indeed.

Delivering quality crosses into the box from corners, or trying to bulge the back of the net from a free kick, will take some doing in PES 2017, especially if you're unfamiliar with the system. The left analogue stick is used to move the angle of delivery and flight of the ball, which can be a little difficult at times. This is mainly because it reacts a bit too sensitively, and any last moment movements before the ball is struck (using circle on PS4) often has an effect.

Our personal opinion is that it's not the best system, but it oddly makes scoring a goal from corners or free kicks more satisfying, given how tricky it is to pull off. 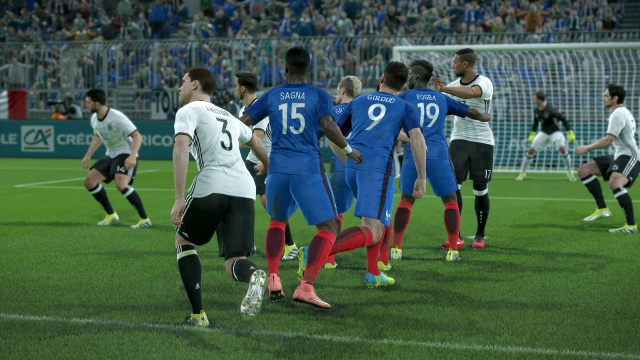 One of the more frustrating elements (from a very short list mind you) on PES 2016 was the instant replays that would pop up after goals were scored, often prompting gamers to try and edit them for uploading. While we appreciate Konami's desire for PES gamers to showcase their goals online, it ultimately detracted from gameplay, and the skip button could not be pressed quick enough for us. It appears, nothing has changed in that regard for PES 2017, as goals are also brought up in replay mode once they're scored.

Will PES 2017 outdo its FIFA counterpart? The short answer is probably not, especially as the old bugbear of a very small number of teams and leagues that are officially licensed is still present.

In terms of on the field gameplay, however, PES looks to have FIFA beat, particularly when it comes to AI. If Konami can sign up more teams for future iterations, the gap between PES and FIFA will certainly diminish. For now though, FIFA looks the safer bet for the long run.