Why is it, that things are always better when they are free? It's hard to pinpoint exactly, but there's no denying that this year's Free Comic Book Day (FCBD) is shaping up to be one of the largest and most successful to date. We posted a small preview of FCBD taking place this weekend on 3 May 2014, as comic book stores around the country gear up for large numbers of possibly spandex-sporting fanboys and fellow pop culture enthusiasts.

To get a better idea of what events, giveaways, prizes and free comics to expect, we tapped the knowledge of Cape Town based retailer Mahdi Abrahams of Readers Den and Johannesburg native Karyn Brocklebank of Cosmic Comics, on the twelfth installment of this ever-growing event.

Having made its debut in 2002 in the US, local comic book retailers were quick to jump aboard this inaugural event in the same year, happily reporting swelling numbers each year since then. Readers Den for example saw a little over 100 people during the 2002 edition of FCBD, but last year recorded a staggering 2000 plus attendees. Abrahams is expecting even more people to flock to Readers Den's Claremont Stadium on Main store, taking full advantage of the shopping mall's setup for the various cosplay shows and prizegivings.

Cosmic Comics too, are expecting fans in their droves, with an estimated 500 people passing through their store doors on Saturday. Some comic book fans were so eager to be the first to receive their free swag, that they waited outside Cosmic Comics' Northcliff-located store overnight, last year. A clear indication that this event has garnered plenty of interest since they began hosting the event in 2004, because "who doesn't want free stuff?"

So you're probably asking, how exactly does this whole free comic book thing work? Well, comic book publishers, most of whom are based Stateside, release roughly 43 comic books for retailers across the globe to order. Among these titles, local consumers can expect comics like DC's The New 52 Futures End, Marvel's Guardians of the Galaxy, Archie Digest #1 (100 pages) and Hello Kitty Surprise. 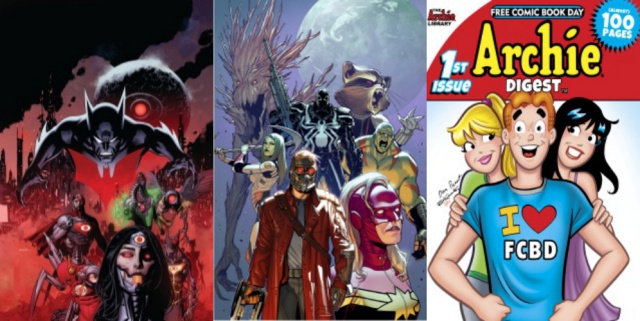 Meaning that there will be something for everyone to look forward to getting their hands on. Which is really the most important part of FCBD, a chance to not only celebrate the medium, but also generate some much needed exposure of comic books and graphic novels to those who may not have ever experienced any interaction with them before.

Apart from the free comic books themselves, both Cape Town and Joburg FCBD attendees will also receive some incentivised discounts on in-store comic books, graphic novels, clothing and figurines. Cosmic Comics have organised a signing session from the creators of locally produced graphic novel Rebirth, as well as commissioned drawings of event goers by some talented Joburg artists. Readers Den has also organised a lucky draw where one of their customers can win up to R10 000 worth of prizes, not to mention the cosplay show, where the best-dressed attendee will be judged.

As well received as FCBD has been in South Africa, it still has plenty of room for growth and development, with Karyn importantly pointing out the involvement of local comic book creators as being an area of improvement. She believed, and we concur, that the possibility of local free comic would be a welcome addition, perhaps offering a platform for other aspiring artists to showcase their talents.

South Africa is a country with plenty of untapped talent, with our resident comic book expert Moray Rhoda opening our eyes to just how well local artists have been plying their trade abroad. It’s clear that as FCBD grows and interest in comics books as a whole develop, it will lead to greater importance being placed on nurturing and cultivating that talent into helping would-be comic book creators find a voice.

If you happen to find yourself near a comic book store tomorrow, we urge you to pop in and see what they have going on. Plus, the free stuff doesn't hurt either.

For more information on local comic book stores, check out: