Google has announced a few key enhancements to its Hangouts messaging application, with its new Hangouts 2.1 update set to launch on the Google Play Store later this week. This new update will now allow Android users to seamlessly integrate their SMS and Hangouts conversations.

In a recent posting, Google detailed the highlights featured in Hangouts 2.1, with SMS and Hangout conversations with the same recipient now combining into one single conversation. This will allow users to quickly flip between the two messaging options, with different message types displaying on one timeline. With received messages, a small label is attached to each message indicating a "via SMS" designation. With sent messages, Hangouts are green and SMS are clear. 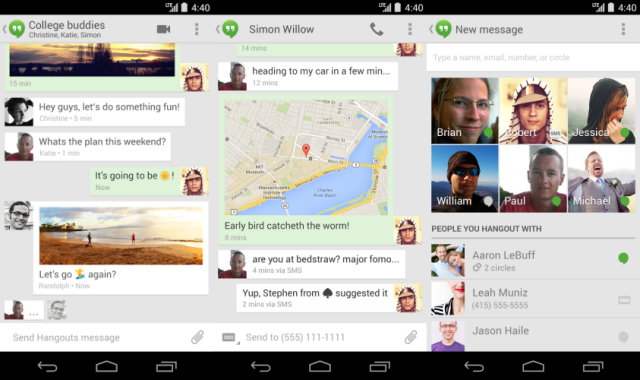 This new feature has also seen a change of the look of user's contact screen, with two main sections designated to people you SMS regularly and those you have Hangouts with. Android users who receive the new 2.1 update will also be able to revert back to their original split messages view, should they not favour the new layout.

Another addition is a newly designed home screen widget for quick access to Hangout conversations. It is also said that Google has improved video call quality, as well as enhanced SMS and MMS reliability for a better user experience.