Here’s some good news for local book lovers – South African readers can now avail themselves of ebooks on Google Play.

The company explained that the announcement, which was made this week, will “give users access to hundreds of thousands of books, including bestsellers and classics from hundreds of publishers.” Ebooks thus purchased on Google’s Play store can be read on both Android and iOS phones and tablets, via the rather nice, and newly updated, Google Play Books apps, as well as on a PC if you are so inclined.

Taking a quick gander at the Play Books store also revealed an accessible user interface, with books sorted within the app according to various categories, by new arrivals, top selling and top free books. We were particularly interested though, to see how the prices, given in rands, compared with Amazon’s store (bearing in mind that, on this, you pay in dollars and thus have to take the currently dismal exchange rate into account). 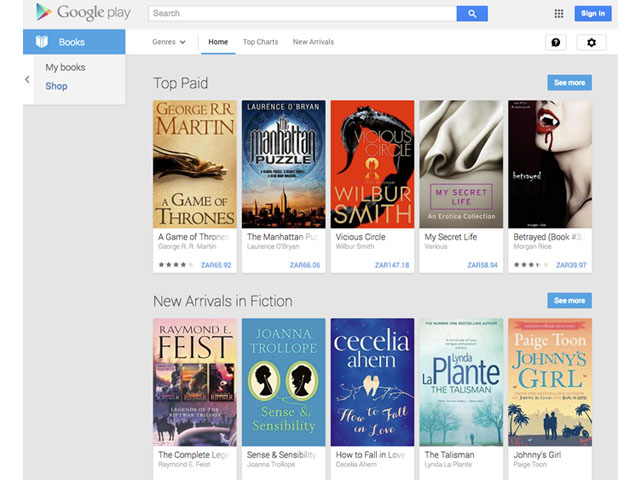 The Google Play Books store is easy to navigate and accessible, preety much all we required.

Even so, we found there was mostly a parity between the two. George R.R. Martin’s A Game of Thrones, which is currently the number one seller in the Play store, carried a R67 pricetag on Play Books, as compared with $7 (R70) on Amazon’s Kindle store.

Looking then at new releases, we found a similar scenario. Allegiant, the newly released third book in the Divergent series is R111 on Google’s offering, but a little more expensive at $12 (R120) on Amazon. Admittedly, you could argue that the exchange rate as it affects purchases from Amazon would largely influence these comparisons, and you would be right, with a R7 to the dollar exchange rate potentially shifting prices in Amazon’s favour a little.

However, for an eye opening surprise, another new book, Dean Koontz’s short story, Wilderness is currently R10 on Play Books but $6 (R60) on Amazon, a whopping six times the price.

What this means is that, depending on your reading preferences, you will mostly likely want to check out the Play Books store before pulling the trigger on an Amazon purchase, unless of course you are wed to your Kindle, in which case, Amazon has likely already ensnared your loyalty.

More good news is that apparently Google will be adding more titles and South African content from today onwards, according to Santiago de la Mora, the director, for print product partnerships.

In the final analysis though, Google’s Play Book store entry into the local market (finally!) is good news, offering more choice (always a good thing) and yet another avenue of feeding one’s ebook appetite.