Google's Pixel 3 and 3 XL will reportedly have different designs

There's a current trend among new smartphones these days, with every manufacturer opting for an edge-to-edge display that features a screen notch. First introduced with the iPhone X, Android phone makers followed suit, and almost every 2018 flagship device to date features the design.

It looks like Google will also be jumping aboard the screen notch train, with a recently leaked image showcasing the design of screen protectors for the Pixel 3 and Pixel 3 XL.

It is the latter device which is shown with a bezel-less display, and screen notch housing what will likely be the front facing camera and speakers. The standard Pixel 3 though, appears to look much like its predecessor and still retains noticeable bezels at the top and bottom of the screen. 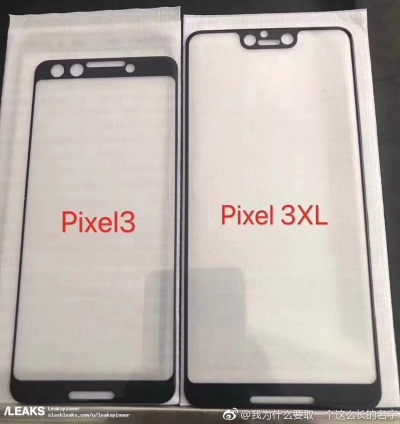 The validity of the leaked image is still to be verified, but given the fact that phone design is something that Google leaves in the hands of vendors like HTC and LG, both of which released phones with screen notches of late, it is highly likely that the Pixel 3 XL will do the same.

We're quite pleased to see that a non-screen notch version will be available in the form of the normal Pixel 3, as this particular phone design trend is a bit hit and miss for us. With several months to go until a Pixel 3 and 3 XL is expected from Google, they'll probably be more leaked images to come.