Andre Bodson, the vice president and general manager for HP’s Printing and Personal Systems (PPS)  group for Middle East, Mediterranean and Africa, began by reiterating that the new style of IT, characterised by the four megatrends of mobility, cloud, social media and big data, also meant that the world was more connected than ever before. While this has its benefits, it also made fighting against counterfeit goods – and the damage they do – even more complex, with criminals becoming more savvy and finding ways to pass off inferior products as the genuine article.

Bodson pointed out that exacerbating matters is the fact that the vast majority (94%) of HP’s users who find themselves with counterfeit goods haven’t even sought them out, but rather had been deceived.

He continued that only 6% of HP’s users willingly bought fake products. Nonetheless, the impact of the counterfeit trade of toner and ink cartridges alone had an impact globally of $3 billion on the industry as a whole.

The problem is, beyond what might seem like a 'steal' of a price, counterfeit printer cartridges, for example, bring a host of problems to the user. According to HP, these can leak and irreparably damage an expensive printer, or just offer inferior life and results. It is for this reason, explained Nosipho Simelane, HP’s Printing Systems category manager for Printing and Personal Systems Group, that the company had gone to great lengths to try educate the general user and help them be able to distinguish a genuine HP product as well as be aware of the dangers of fakes. 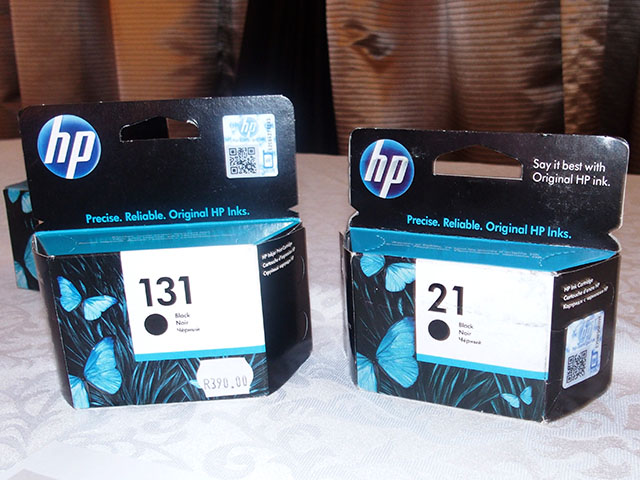 The counterfeiting of toner and printing ink has a massive impact on the industry - to the tune of $3 billion.

HP believes that for businesses, the counterfeit problem is tangible, intangible and potentially severe. Tangibly it is estimated that counterfeit products cost businesses billions in lost revenue, while more nebulously it can also damage their brand, and have an indirect effect on a business’s closing down or being forced to lay off employees. Nor are governments globally immune to the scourge – with these losing out on taxation in the region of $150 million every year and some 2.5 million jobs being forfeited. What’s more, the figures for the loss on international trade was staggering – in the order of $360 billion per year.

What quickly became apparent during the course of the conference was that counterfeiting of goods was hardly a victimless crime and had an even more insidious and detrimental effect than simply financial losses.

David Louis Chilalire, from Interpol’s Malawi office, elaborated that counterfeiting rings’ tentacles extended into and had links with a variety of other crimes, including human trafficking and increasing government corruption through bribing port and border officials.  The bad news – for Africa and South Africa at least, is that as the global trade in counterfeit goods is growing, Africa is increasingly being targeted as a market for counterfeit merchandise.

Furthermore, Africa is apparently being used as a transit route for fake goods, which also poses an indirect threat to European and American markets. It should come as little surprise that the majority of counterfeit goods were coming from China. Apparently though, instead of exporting these to the continent, now counterfeit manufacturing plants were setting up shop locally as well.

On the good news side of the equation, neither HP nor the authorities involved are sitting on their hands. Indeed, the company reassured that over the last five years (2009 through 2013), HP had conducted around 1 600 investigations across the Europe, Middle East and Africa (EMEA) region. This had resulted in about 1 300 enforcement actions (raids by authorities) and around 11 million units of counterfeit products and components seized, thus preventing them from being sold in the EMEA marketplace and beyond.

“The HP Anti-counterfeiting Programme works hard to protect partners and customers, but this is only made possible through close collaboration with law enforcers around the world,” commented Fabrice Campoy, Printing and Personal Systems Africa director. “We therefore truly appreciate the cooperation of African law enforcement to helping to make this event possible, and protect African customers from the inferior standards and potential risks of counterfeit,” he concluded.