With 2014's Google I/O event set to take place this week, the rumour mill has begun churning out predictions for what devices and software will be unveiled for developers to make the most of. With many swirling rumours, a leaked image and spec sheet has surfaced for a certain 9" Nexus tablet. The information comes courtesy of Android Police, who state the new device was designed by HTC. The Taiwanese manufacturer has christened its Android powered tablet the HTC Volantis, which is otherwise known as the Nexus 9.

Based on the leaked images, there is very little design detail distinguishing the HTC Volantis from previous Nexus iterations. Instead, it’s the Nexus 9's internal components which concerns us the most, with a spec sheet being released alongside the images. It lists an 8.9" (diagonal) display (2048x1440), featuring a 0.31" thick aluminium frame, weighing in at a respectable 418 g. Powering the HTC Volantis is an Nvidia Tegra K1 processor, supported by 2 GB of RAM, although no official listing of its clocked speed is added. 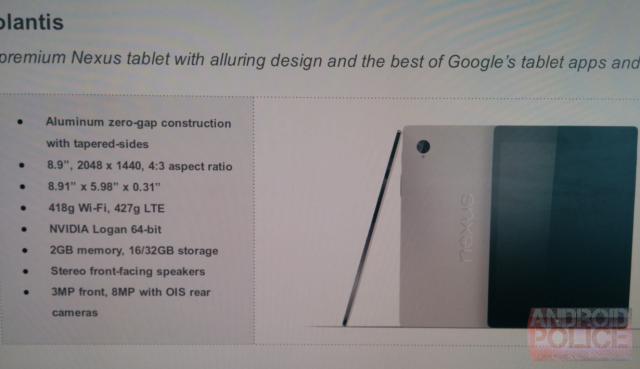 On paper at least, the HTC Volantis looks a solid addition to the Nexus lineup, but it does bring into question a long rumoured move from Google. This being, a realignment to discontinue its Nexus lineup, instead favouring a pure Android program named Android Silver. Android Silver is said to replace Google's Nexus smartphone offerings, with plans to design devices that closely adhere to it's Android user experience. It is also a move that will attempt to clean up a great deal of third party inconsistencies, and create a lineup of premium  Google devices.

Whether or not any of the above is in fact true, remains to be seen, with the HTC Volantis and news regarding Android Silver hopefully being revealed in the coming week. We'll be sure to keep all tech enthusiasts posted on any of the key developments making their way out of Google I/O.