Everyone likes something for nothing, and it appears as if Microsoft is abundantly aware of this, as the company has unveiled plans to increase the OneDrive cloud storage capacity to users across the board. This new plan, which takes effect as of today, will now give 15 GB worth of free storage space on OneDrive to all users without an Office 365 account. Those however in possession of an Office 365 account have also been catered for, with access to 1 TB worth of storage capacity.

The move comes as Microsoft aims to make its cloud service offerings more appealing than Google Drive, which too offers users a minimum of 15 GB worth of free storage. This is in fact more than double the amount of OneDrive space afforded to users in the past, previously listed at 7 GB. It's also more than Dropbox, which starts users off with 2 GB of free space, with the ability to earn up to 16 GB more. According to Microsoft, they believe "providing 15 GB for free right out of the gate – with no hoops to jump through – will make it much easier for people to have their documents, videos, and photos available in one place." 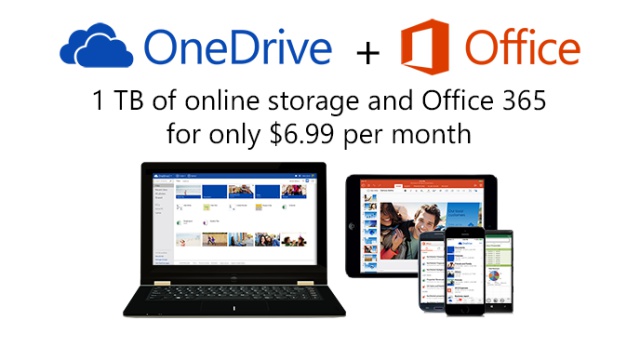 The new offer for Office 365 subscribers also features newly structured deals for specific Microsoft software packages. Regardless of one's plan, access to 1 TB of storage space is still a given, but Office 365 Home will split the 1 TB between a maximum number of five individuals sharing one account. Office 365 Personal and University however, will give access to 1 TB per subscription. All of which falls along the same lines as April's similar announcement of 1 TB cloud storage for OneDrive Business customers.

Added to this, is Microsoft's reduction in monthly subscription storage options, with no Office 365 account required for use of this service. The new monthly pricing is set at $2 (R21) for 100 GB and $4 (R42) for 200 GB. It's important to note that this pricing model, is specific to the US, with no indication of local pricing confirmed as of yet.