We've chronicled many of Microsoft's big announcements for Windows 10, and today marks another significant one. Microsoft took to its official Windows Blog to confirm the integration of a native Windows 10 PC app to help users connect with a mobile device, whether it be Windows Phone, Android or iOS.

According to the blog posting, Microsoft's new Phone Companion app will automatically sync up with the user's mobile device of choice when selected on their Windows 10 PC. This service will fall in line with some of the cross-platform apps that Microsoft has rolled out in recent months. A significant application is OneDrive, which will bring all of a user's photos, videos and content from their mobile device into the PC. The same functionality will be coming to Microsoft's soon-to-be updated Music app, with access to music stored on OneDrive now readily available. 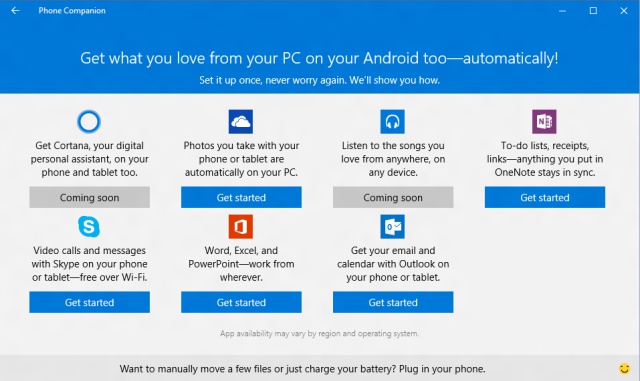 Added to this, Microsoft will also be making Cortana (Microsoft's mobile personal assistant) available to both Android and iOS users. Those touting an Android device will be receiving Cortana first in June this year, with plans for an iOS version expected later in 2015. As with the Windows Phone variant, Cortana will bring a range of services to the fore, including voice aided searches, setting reminders, and dictating e-mail replies. Microsoft was quick to note though, that Cortana would have a richer range of features on Windows Phone, compared to other operating systems. The reason for this, according to Microsoft is the restriction to in-OS access currently in place for both Android and iOS.

With the full benefits of both the Windows 10 PC-native Phone Companion app, as well as Cortana expected later this year with the rollout of Windows 10, a preview for the former is currently available to all Windows Insider Program users. Till then, click on the video below for a glimpse at Windows 10's Phone Companion.