One of the apps we have heard quite a bit about from Microsoft is its Teams offering, particularly in discussions around collaboration. That however, has only been available to paying customers. Until not, that is. Last night, however, the company announced a new free version that any organisation or individual can use, from freelancers to members of larger organisations.

In a nutshell, Microsoft Teams is a shared workspace, which brings together file sharing, chatting, sharing and collaborating on files, and holding video conferences into one application.

• Unlimited chat messages and search
• Built-in audio and video calling for individuals, groups, and full team meetups
• 10 GB of team file storage plus additional 2 GB per person for personal storage
• Integrated, real-time content creation with Office Online apps, including built-in Word, Excel, PowerPoint, and OneNote
• Unlimited app integrations with 140+ business apps to choose from - including Adobe, Evernote, and Trello
• Ability to communicate and collaborate with anyone inside or outside your organization, backed by Microsoft’s secure, global infrastructure. 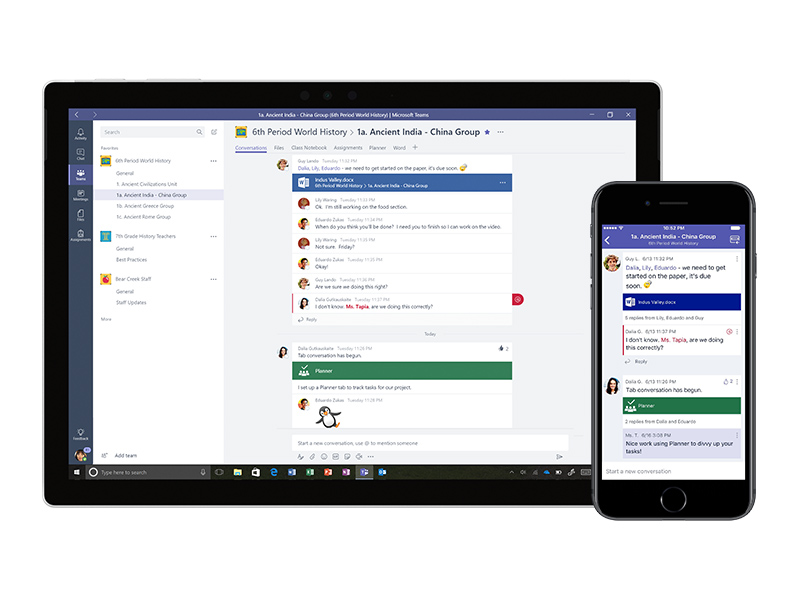 Raanah Amjadi, the marketing manager for Microsoft Teams further reassured that the free version of the app looks the same as the paid version, with the “same rich experience”.

As in the paid application, users can add apps, files, share Office apps, and edit those documents from within Teams. Additionally, she added that users who find themselves requiring more storage can update from within the free version itself at any time.

The main differences between the free and paid for offering appears to be that the latter boasts additional storage, enterprise level security, and can be used by any sized organization – so beyond the 300 person limit in the new free version.

From small to big

However, the overarching benefit of the new offering appears to be for small companies that find themselves having to scale up and manage a sudden growth in their organisation. One of the examples given was The Hustle Media Company, which provides its audience with a daily email on the tech and business news they need to know.

Adam Ryan, the vice president of media at The Hustle, explained that as the company nearly quadrupled in size over the last year, it became apparent they needed a solution to connect all of The Hustle’s offices. “As previous Slack users, we found that Microsoft Teams has all the features that other chat-based apps bring, but the teamwork hub allows everything to live in one place,” he commented.

Another organisation having to grapple with a sudden onset of growth was the Urban Agriculture Company, a small business specialising in organic, easy-to-use grow kits of vegetables, flowers, and herbs. The company related that after landing on Oprah’s favourite things, the founder of Urban Agricultural Company, Chad Corzine turned to Microsoft 365 Business and Teams to manage communication among his rapidly growing departments, onboard employees, and protect customer data.

Ron Markezich, the corporate vice president for Microsoft, explained that in the year since it was introduced Microsoft 365 seats have grown by more than 100%, building on the more than 135 million commercial monthly Office 365 users, 200 million Windows 10 commercial devices in use, and over 65 million seats of Enterprise Mobility + Security.

“This momentum is driven by customers—in every industry—who are transforming their organisations to enable high performance from a workforce that is more diverse, distributed, and mobile than ever before,” he added. It is that evolving workforce that the latest offerings appear to be most aimed at enabling.