"Who is the deadliest character in the Marvel universe?" This was the simple question that the people at Morphsuits asked themselves. The answer may not be as cut and dry as you might think, as it's not just the bad guys doing the killing, but also the heroes.

Morphsuits is a UK-based costume manufacturer, whose inventory is primarily comprised of Marvel and Disney characters. They routinely post answers to such pop culture questions, and their latest one details the top 24 killers that Marvel has ever placed on paper or screen (big and small). 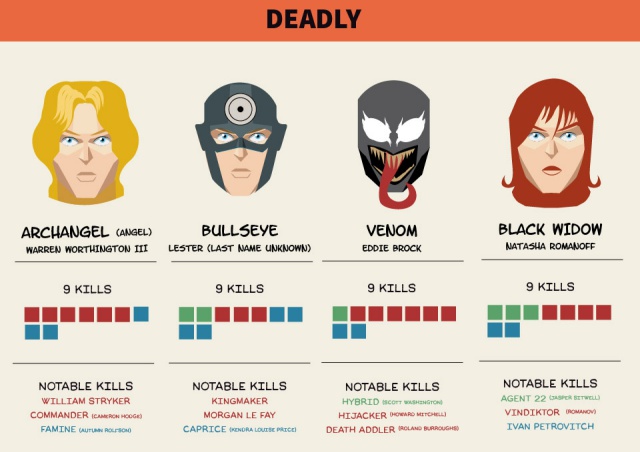 As for what constitutes a kill, lowly henchman and extras have not been considered, but rather characters in the Marvel Universe that are worth creating a biography for. We initially thought that the likes of Mystique and Venom would make the cut, with seven and nine kills respectively, but some of the most virtuous heroes were also added. An example is Cyclops, the leader of the X-Men (despite Wolverine getting all the glory), who himself has a pretty high eight kills, most notable of which is Professor X in one of the comic book series.

To check out the full list, as well as Morphsuits' many Marvel costumes, head here.