The Street Fighter franchise is well storied by now, and its core characters have achieved an almost icon-like status in the world of gaming. For next year's Street Fighter V, which is scheduled for release in March 2016, Capcom is hoping that a new crop of characters will not only win gamers' hearts, but also give them a competitive edge.

First out the blocks, as an all-new Street Fighter character, is Necalli, who you can see in the video below dishing out a world of hurt on the new-look Ken Masters. 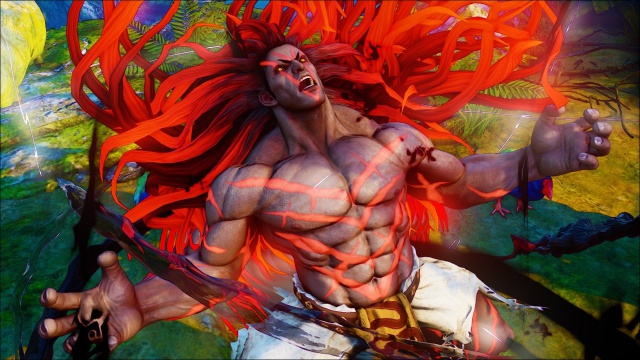 Although Necalli's origin is unknown, we'd describe his look as a mash-up of Tarzan, a Super Saiyan and Khal Drogo. He does not say much, but rather lets his fists do the talking, in a fighting style that's best defined as brutal and effective. Many of his moves in close quarters rely on kicks, with a couple of violent head tosses thrown in for good measure.

Along with Necalli's punishing fighting style, he also goes into a "Berserker" mode (his V-Trigger), as his long matted dreads come to life and glow a bright red. Added to this, are a series of red paint marks on his body, which also burns when going Berserker.

With Mortal Kombat X (review) having already revitalised an arcade fighting franchise, hopefully Street Fighter V can do the same.