Commuters at two of the busiest taxi ranks in South Africa, Gugulethu and Khayelitsha, can now use the internet thanks to an initiative from Project Isizwe and the Open Society Foundation of South Africa. The Free Internet Zones will enable people in and around the Gugulethu and Khayelitsha taxi ranks to access the internet, making it easier for them to get information about issues such as education and employment.

This initiative follows the successful implementation of Free Internet Zones in Tshwane and the Eastern Cape by Project Isizwe. The organisation works with various partners to bring free Wi-Fi to public spaces in low-income communities in South Africa. It enables communities by connecting people for education, economic development and social inclusion. The Tshwane network was launched in November 2013 and has since grown to over 700 000 unique users at over 500 sites.

“Living without information is unthinkable and we believe that we are making a significant contribution to the people of Gugulethu and Khayelitsha by giving them access to opportunities to become employable and contribute to the economic development of the city,” says Zahir Khan, COO of Project Isizwe. 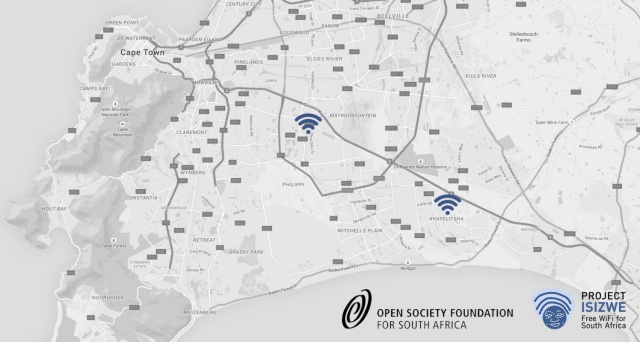 "For too many people in South Africa, using the internet has turned into a privilege, when it should be a right. We hope that this project will galvanise a nationwide call for free and subsidised internet for all people living in South Africa in under resourced communities," says Fatima Hassan, executive director of Open Society Foundation of South Africa.

"The project is by no means a comprehensive solution to the bigger issues of affordability and accessibility of the internet for ordinary South Africans -- this requires collaboration between government and private companies that ordinarily provide such services, coupled with a strong policy framework that enables affordable access on a permanent basis," Hassan concludes.