Puma has put the running community on notice that it’s taking road and long distance running a lot more seriously - and their new running shoe line is the start of this commitment. Announced at an international live-stream yesterday, Puma is pushing five new shoes under its new NITRO line-up.

These shoes are all equipped with new NITRO foam midsole, which Puma claims offers a balance between being lightweight and responsive.

In the past we’ve seen different midsole tech from Puma, including IGNITE foam, NRGY beads and more recently XETIC cushioning technology. However, NITRO is the midsole Puma will be moving forward with, stating it’s infused with nitrogen gas through a process that makes it possible to combine three key benefits to the runner - responsiveness, cushioning, and a drop in weight. At 266 g per shoe, it’s a lot lighter than the new Adidas Ultraboost 21 (340 g), although heavier than the UA Flow Velocity Wind’s 241 g.

The flagship shoe in the range, for now, is the Deviate Nitro, an all rounder that contains two layers of NITRO foam, split with a composite carbon fibre plate called INNOPLATE. We’ve seen more of these plates enter into the racing shoe market in recent years, with the INNOPLATE said to provide runners quicker toe-off for a more forceful motion through their stride.

On the outsole is another new bit of tech from Puma, a rubber compound called PUMAGRIP which provides all-surface traction. TechSmart received a pair of Puma Deviate Nitro’s to review, and although we haven’t taken these to the streets yet, the NITRO foam feels very bouncy, significantly more so than the Puma CALIBRATE runner or HYBRID Ozone. Keep an eye out for our review coming soon. 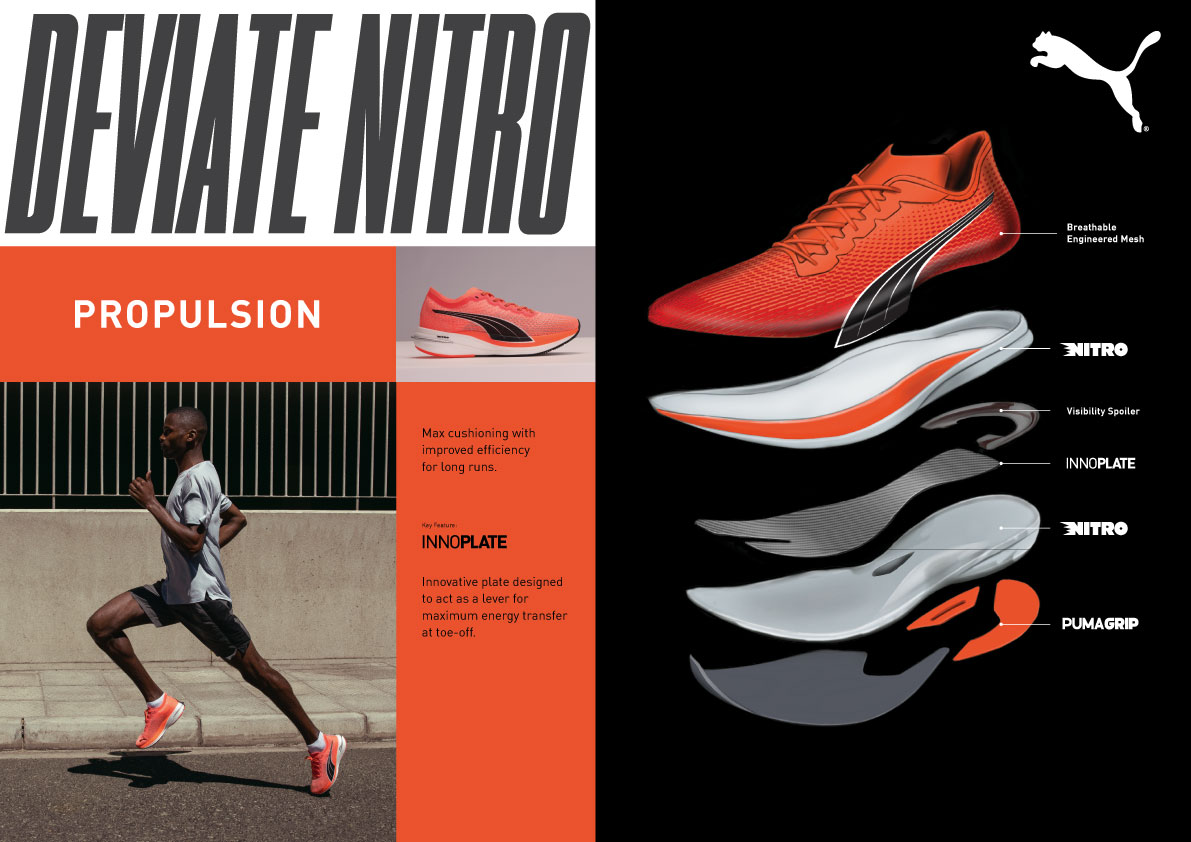 Importantly, at yesterday’s press conference Puma’s global director of Running and Training, Erin Longin noted that the company will also pay more attention to women runners. She stated that women’s running shoes should not just be resized men’s shoes, believing that there’s different biomechanics involved when designing a shoe for women. As such, the Deviate Nitro women’s shoes are engineered for the female foot, providing a narrowed heel, lower in-step and sculpted arch shape.

Locally, the in-store date release date for the Deviate Nitro in South Africa is scheduled for the 4th of March, but they are already available on https://za.puma.com and a few more online stores. As we’ve seen with new running releases from Adidas and Under Armour, the latest running shoes certainly don’t come cheap, with the Deviate Nitro retailing for a chunky R4k.

Three more Nitro shoes will be released on the day, including the Eternity Nitro (R2 900), Liberate Nitro (R2 600) and the Velocity Nitro (R2 800). The Puma Deviate Nitro Elite will be arriving in South Africa in the second half of the year.