The last few weeks have been pretty eventful for the motor industry, largely as a result of the recently held 65th International Frankfurt Motor Show. Here are a couple of highlights from the show.

The newest Italian Stallion to gallop out of Ferrari’s thoroughbred supercar stable is the 458 Speciale. Ferrari reduced the 458 Italia’s weight by 90 kg, increased the power output of its 4.5 litre V8 engine from 419 kW to 445 kW at a glorious 9000 RPM, and equipped the car with active aerodynamics. The end result? A quicker 0-100 km acceleration time of 3 seconds (compared to 3.4 in the 458 Italia), and top speed of more than 325 km/h. No pricing info is available yet, but expect it to make the R3.49 million pricetag of the 458 Italia seem cheap.

BMW finally showed off its sublimely styled i8 plug-in hybrid four seater sports car, which is powered by a 1.5 litre three-cylinder petrol engine (170 kW; 320 Nm of torque) and hybrid synchronous electric motor (96 kW; 250 Nm). This sees the all-wheel-drive i8 bring up 100 km/h on the speedo in just 4.4 seconds, whilst being capable of delivering a combined-cycle fuel economy figure of 2.5 litres per 100 km. Drivers will be able to select between five driving modes, one of which is an all-electric mode with a driving range of up to 35 km and a top speed of 120 km/h. No official release date has been set yet.

Mercedes-Benz lifted the lid on its new S500 plug-in-hybrid at the 2013 Frankfurt Motor Show, illustrating how first-class opulence and sportiness can go hand-in-hand with eco-efficiency. Beneath the bonnet of the Merc resides a 3-litre V6 turbocharged engine (245 kW; 480 Nm of torque) and electric powerplant (80 kW; 340 Nm), which rockets the big Merc to 100 km/h in 5.5 seconds while the top speed is limited to 250 km/h. More impressive though is the claimed combine-cycle fuel usage figure of 3 litres per 100 km and 69 g of CO2 per km, less than half that of the VW’s Polo Vivo (147 g of CO2 per km).

Crossovers and hybrids are hot car market segments right now and Lexus is looking to kill two birds via one concept stone in the LF-NX. The car is powered by Lexus’ hybrid powertrain technology to deliver the best mixture of power and economy. Lexus did not divulge any performance figures though, which is fine by us seeing that it is the design of the concept that will deliver the most headlines. According to Lexus, this concept reflects the evolution of its L-finesse design language, showcasing highly sculpted exterior panels, signature Lexus spindle grille, and arrowhead independent Daytime Running Lights. 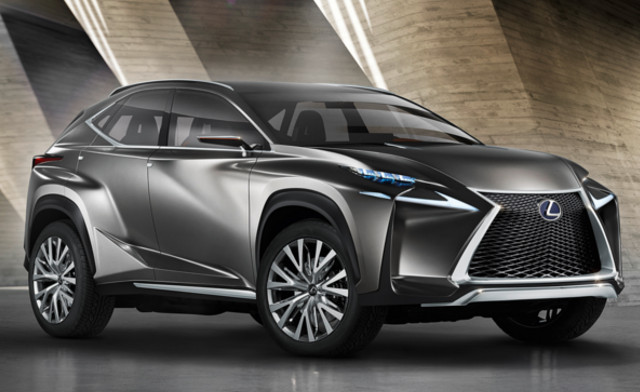