It came, it curved, it conquered as Samsung unveiled its first Curved UHD (ultra high display) TV in Rosebank. The screen, which is noticeably, but not overly, curved, has apparently been designed to conform to the shape of the human eyeball. Samsung explained  that a viewer watching it from the ideal distance (3 to 4 metres) will be able to see every inch and every corner of the screen. This in turn, it asserted, would provide a more immersive entertainment experience.

It’s not just the sides of the screen that are curved though, less noticeably, so are the top and bottom as well. However, to our view, the screen didn’t look like a concave pincushion, but felt more natural and ironically, easier on our eyes the more we looked at it.

Indeed, looking was mostly all we could do, as vibrant colours practically dripped from the set and the picture, as anticipated from an ultra high definition display, was exceptionally sharp.

Answering the question as to why curved TVs are relevant, Matthew Thackrah, the deputy managing director at Samsung South Africa, explained that since its introduction in 1976 in South Africa, the TV quickly became the centre of the home. However, he added, the last two decades had borne major advancements in TV technology, as cathode ray tubes became LCD screens, and TV screens became thinner, larger and sported increasingly higher definition displays.

During this time, he continued, Samsung had invested heavily in research and development, which culminated in the curved UHD revealed this week. 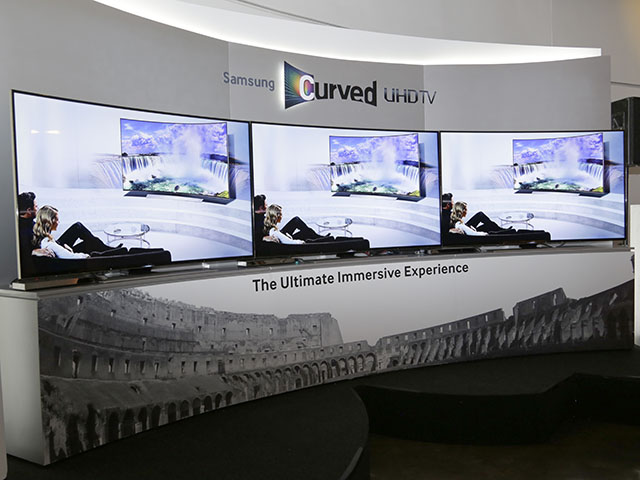 The screen has a gentler curve than you might expect, and does make one feel as if one's picture is being slightly wrapped around your view, like a blanket, as the screen's curve has been designed to fit with the curvature of the human eye.

“Beyond the changes in screen size, we have steadily been changing what we can do with TVs; with the internet for example creating endless opportunities to stream TV from the web onto the screen,” he continued. Furthermore, modern TVs also now boasted further integration with social media the likes of Facebook and Twitter, as well as communications apps like Skype and email.

Ansgar Pabst, Business Lead for TV/AV, Samsung Electronics SA, quickly pre-empted a question that was no doubt on more than a few minds, addressing the concern around having an UHD TV when the source content doesn’t match. To this end, he explained, all UHD TVs feature UHD Upscaling, which converts Full HD, HD and lower resolution sources to nearly-UHD picture quality.

Furthermore, he added that UHD Dimming technology also helps to further optimise picture quality by processing each block of a picture and in so doing, deliver deeper blacks and improved contrast.

Another aspect of the newly unveiled TV was its design. Michelle Potgieter, the director of corporate marketing and communications at Samsung SA, pointed out that TVs were not just a consumer product, but also part of the design aesthetic in a home, adding that “people tend to ignore designs that ignore them.” The pun of the evening was easily hers – “At Samsung we are committed to designing products with consumers in mind, and will always stay ahead of the curve,” she quipped.

The Samsung Curved UHD TV is now available, costing R70 000 for the 65” version and R150 000 for the 78” model. At present, these are the only two models slated for release locally.