The Galaxy Gear may have been receiving the most buzz and anticipation leading up to its unveiling, but that wasn’t all Samsung brought to IFA. The company also unveiled its new Galaxy Note III and a newly updated Galaxy Note 10.1.

If the 5.5” Galaxy Note 2 (review) left you wondering whether Samsung would opt for an even larger phablet, the answer to that question is yes, it would. The Galaxy Note 3 boasts a wider (5.7”) full HD Super AMOLED display with 381 ppi, yet slimmer (8.3 mm) and lighter (168 g) design.

Also receiving a bump is the battery, from 3 100 mAh to 3 200 mAh, and the rear camera, from 8 megapixels to 13 megapixels, which also offers smart stabilisation and LED flash.

Apparently there will be two versions, one with a 2.3 GHz Snapdragon 800 and a second which instead relies on an Exynos Octa-core SoC processor, clocked at 1.9 GHz. Both though, will boast 3 GB of memory, and be available with either 32 GB or 64 GB of storage, naturally expandable via microSD.

From the very first Note, the Bonnie to the smartphone’s Clyde has been the S-Pen, and this too seems to have received some enhancements to be quicker on the draw.

Samsung stressed that the advanced S Pen plays an integral role in how users interface with the device, making all daily routines easier, adding that it is “designed to be fully functional as a communication driver between the phone and the user by creating essential input and control features. “

For example, clicking the S Pen button while hovering over the screen introduces users to Air Command, aimed at obviating against having to toggle between screens, memorise commands or look up different menus. To this end, Air Command boasts a palette of five features - namely Action Memo, Scrapbook, Screen Write, S Finder and Pen Window. In brief: 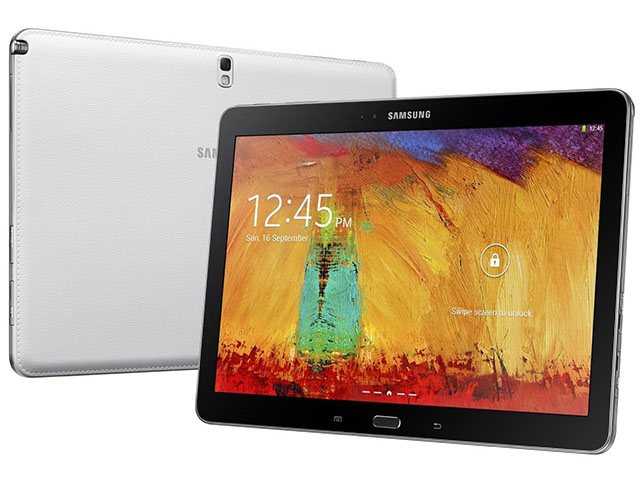 2012's Galaxy Note 10.1 is back for round two, this time with a better processor, improved screen and a slew of new features.

As on the Galaxy Note 3, the tablet also brings the suite of Action Memo, Scrapbook, Screen Write, S Finder and Pen Window apps to the table. Furthermore, as would be expected for a device, the updated tablet also comes with improved S Pen and S Note functionality. Samsung has promised that the S Pen now offers improved responsiveness and efficiency enhancements. Additionally, and no less important to the tablet’s note-taking functionality, is that S Note has apparently also received an upgrade, to offer a more intuitive, easy-to-use interface.

The tablet is also slated for release globally in the month ahead, and will come in three connectivity options: Wi-Fi Only, Wi-Fi and 3G and W-iFi and LTE. As with the previous iteration, it too will be available in white or black, with storage capacities of 16 GB, 32 GB and 64 GB.

Alas, local release information is yet to be confirmed, with Samsung’s public relations in South Africa saying that a local launch for certain of its newly announced products is on the cards for a later date this year.