Samsung didn’t hold back last night at its latest Unpacked event, held in Sandton, in conjunction with  the live streaming of the international Unpacked. With the Note 10 and Note 10 Plus, With it, it firmly staked its claim as the king of the premium phone hill, debuting what looks like the best Note phablet to date. This is not just due to the appearance, which looks more like an exquisite piece of tech art than a smartphone, but a plethora of useful new additions to the Note range’s feature set.

First things first, to get the bad news out of the way.

No, as was rumoured, there is not a 3.5mm headphone jack on neither the Note 10 nor the Note 10 Plus. This decision was apparently taken, according to Justin Hume, the director of Integrated Mobility at Samsung South Africa, to make room for a bigger battery and also in deference to the trend towards wireless headphone. While there will be a 3.5mm to USB-C dongle made available, it won’t be included in the box.

Price wise, you’re looking at R19 000 for the Note 10 and R23 000 for the Note 10 Plus, or R899 and R999 on contract respectively. However, the company noted that it is in encouraging the operators to offer some kind of rebate incentive, where you could trade in your Note 9 (and perhaps S10) for a discount.

Here’s the good news – if you are in any kind of productivity or creativity line of work, you are probably going to seriously want to consider doing so. The Note 10 Plus, particularly, based on our very brief, initial hands on with the product is just begging to be used as a productivity and creativity tool.

Whether you are interested in the larger 6.8” device or its smaller 6.3 sibling, both boast a Dynamic AMOLED Infinity-O Display screen that is reminiscent of Samsung’s recently launched 8K TVs in terms of colour and brilliance.”The former though has the edge, boasting a Quad HD+ display with a 3040×1440 (498ppi) resolution while the latter sports a FHD+ display with a 2280x1080 (401ppi) resolution.

“From the very beginning, the Galaxy Note has stood for the best-of-the-best technologies and features. The Galaxy Note10 re-imagines this promise for the modern Note fan who uses their smartphone to take their productivity and creativity to the next-level, and who effortlessly flows between ideas and endeavours at a moment’s notice,” commented Hume. 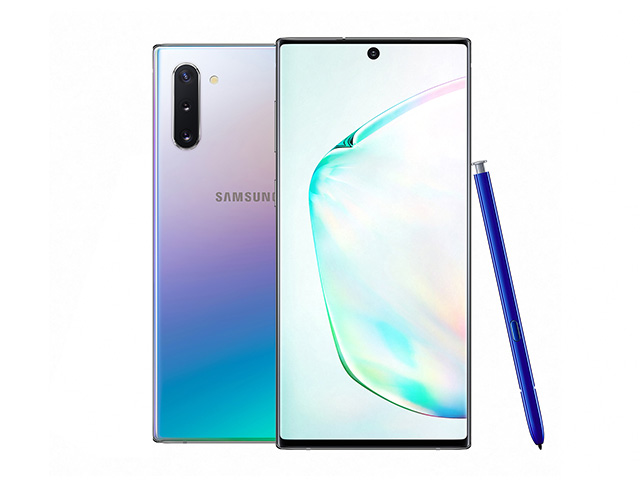 Aura Glow (above), along with Aura Black (main image) and Aura White are the colours that the Notes will be available in

In pursuit of more productivity

For those productivity mavens out there, it is the inclusion of Samsung’s DeX that was the standout feature of last night’s Unpacked. This gives you the ability to synchronise your smartphone and tablet and work fluidly between the two, to marry your phone functionality with that of your notebook. So for example, you could type and send messages, or post to social media from your phone, but using the keyboard of your PC. Or alternatively, you can shoot images on your phone and seamlessly, as demonstrated by Stuff’s Craig Wilson, drop those images and videos into Wordpress using your notebook.

It’s akin to what Huawei introduced with its OneHop technology, but taken to another level. Unlike the Huawei, you don’t need a dedicated Samsung notebook. Rather, DeX on the Note 10 works with Mac and Windows PCs across the board. As well, there is a tap to convert functionality that converts hand writing to text, and export it to PDF, or Word, wherein it is editable. For writers in particularly, that is going to be a boon.

Furthermore, Link to Windows has been integrated directly into the Quick Panel. This enables users to connect the Note 10 to their Windows 10 PC, where they can see notifications, send and receive messages, and review recent photos without pausing to look down at their phone. 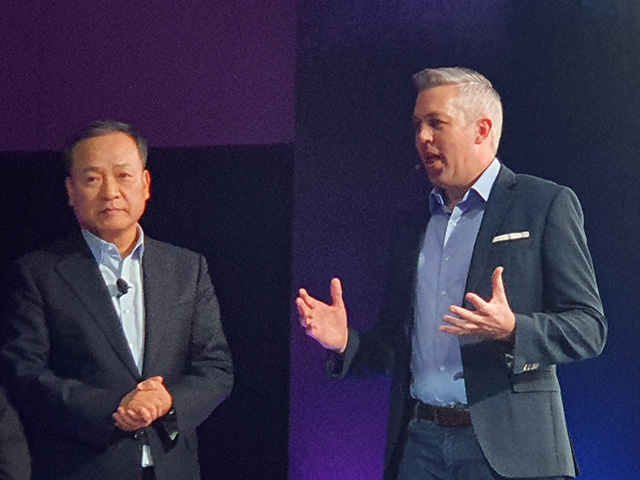 For creatives, there is a built in motion free functionality, which basically gives you a steadycam from within the phone itself, without requiring an expensive rig to get smooth steadycam video. As well, the Note 10 offers a full video editing suite for editing movies on the device, complete with titles, transitions and effects, and then posting them to social media, YouTube etc on the fly.

It’s not just video creators who get some love with new functionality – artists do as well. Illustrator Karabo Poppy Moletsane, showed how the S-pen can now be used quite a distance from the phone to draw, paint, and navigate from a distance of about 10 feet away, taking the remote functionality of the S-pen on the Note 9 a step (or ten) further. That turns the S-pen into something of an S-paintbrush, and we cannot wait to see what potentials it could open when a Note is connected to a larger screen for digital painting.

All the above though, is just scratching the surface of what the phone appears capable of. But if the lack of a 3.5mm jack is still a downer for you, here’s its counter: the company has introduced a screen repair program that will give users two years of screen and battery replacements for R499.

Both phones are set to be available from the 30th of August, but those who pre-order either of the devices will receive them a week earlier, on the 23rd, in line with the global availability.

Sung Yoon, the president and CEO of Samsung South Africa, had a particular promise for the South African market specifically, affirming that this region is a top tier market for the company and we will continue to be amongst the first to receive its latest products.

“South Africa is the only growing population whose largest demographic is under 25 years of age, I  believe in the young generation and their creative power,” he added.

Judging by the focus of last night’s Unpacked, it certainly seems like the Note 10 is aimed firmly not just at those who value productivity, but who are riding the wave of creativity into creating a brighter future for themselves.