The critical reception of Windows 8 has made the prospects of making the switch from Windows to Mac a bit more enticing for computer users. TechSmart recently got the chance to ditch our Windows-powered notebook for a MacBook Air for a month thanks to the guys at iStore. Here follows our initial experience.

Our first week with the MacBook Air went off without a hitch, as we were surprised by how much easier it was getting used to navigating through the interface of Mac OS X Mountain Lion than it was getting to grips with Windows 8. Connecting to the Wi-Fi network and printer at our office, as well as setting up our corporate email within the Mail app, took just a few minutes and worked in the same manner as it did on our Windows 7 operating PC.

The first few differences came in the way of keyboard shortcuts and touchpad navigation. Even though the MacBook Air’s keyboard does have a control key like your average notebook keyboard, it is the command key that assumes the functionality that the control key sports on a Windows PC. For instance, if you want to copy text using a Mac you press command and c (like control and c on a PC) and if you want to switch in between your open applications you press command and tab, as opposed to alt and tab as on a PC.

Special characters are still inserted into messages and documents via alt key combinations like these are within Windows, but the key combinations differ considerably from their Windows equivalent. To insert the Euro symbol (€) for example is done by pressing alt (aka the option key), shift and 2 together, compared to holding down alt while pressing 0128 within Windows.

Users can navigate their way around Mac OS X Mountain Lion by performing a number of multitouch gestures on the large touchpad of the notebook. A three finger swipe up for example takes you to Mission Control, which provides one with an overview of all running applications, similar to the helicopter view in Android. Performing a five finger pinch takes you to Launchpad, from where users can launch any of the apps installed on their machine. 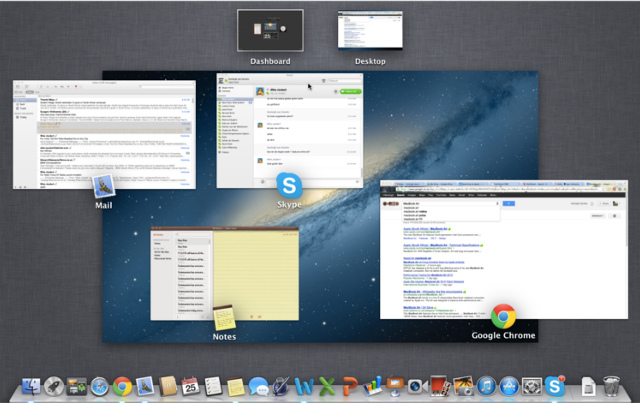 A three finger swipe up takes you to Mission Control, which provides users with a view of all the applications currently running.

Unlike on a Windows powered notebook, you do not have both a left and right click button on your mouse. We compensated for this by employing our Logitech wireless mouse with the MacBook, which makes the same type of right click functionality (copy, paste, delete) from a Windows environment available within Mountain Lion.

An appetite for apps

Apps are installed by downloading them from the Mac App Store or from the web. We immediately proceeded to download Google’s Chrome web browser, Gimp image manipulation program, Skype, VLC media player, Avast! antivirus, and encountered the different, but straightforward manner in which you go about installing apps on your Mac. 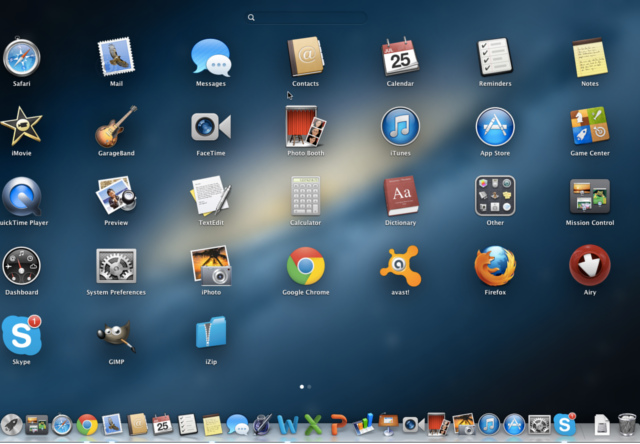 iOS mobile device users will certainly recognise the look of the Launchpad, from where users can launch any app installed on their Mac.

While Mac OS X works differently to Windows 7 or 8, the process of switching from PC to Mac is most definitely not the schlepp we expected it to be, as we were able to employ all the same software we used on PC both at work and home. In these early days, there are a couple of hurdles we see users struggling with, the first of which is gaming, since very few computer titles are released for Mac.

The second more pressing obstacle is that certain enterprise applications such as accountancy software or architectural draughting packages, might not sport a Mac equivalent. Even if they do, you need to make sure that your work will not have an issue with forking out for the Mac version of software in order to accommodate one or a just a few Mac users.