Hurrying home as the evening sky darkened, Andile caught sight of the cane field that lay between him and his home. Ordinarily, fears of cane rats and muti killings would make him skirt the edges of the murmuring field, but tonight he knew that each passing minute would translate into another lash from his father's green stick stinging his calves.

The backs of his knees prickled with anticipation and remembered pain, urging him to cut across the sugarcane field, regardless of outsized vermin and warnings of lurking witchdoctors. As he pushed his way past the tall stalks, thoughts of this afternoon's experience returned to his mind.

His friend Ben had borrowed, without asking, a pellet gun from his older brother, and the boys had spent all afternoon shooting pellets at bird nests near the river, far from any adult presence. When the boys realised they could barely see their targets, the two had taken off, trying to get home before their fathers did. But, while Ben had already reached home and quietly replaced the pellet gun, Andile still had to fight his way through the cane field.

As his bare feet pressed into the warm dirt, Andile's thoughts faded, replaced by a new awareness that he had missed his deadline: it was now night. Wiping a trickle of sweat off his eye, the humid Natal night began to feel oppressive. Sugarcane seemed to tower over him like so many adults, whispering, discussing his impending punishment. The field seemed to stretch forever. Stalk after rustling stalk was pushed through only to reveal another row of the sweet, stifling plant. Andile could hear his heartbeat; a rising thrum that forced his hands to grasp blindly and his open mouth to gasp at liquid air until, doubled over, he stopped. He realised that what he thought was his heartbeat was in fact an audible vibration that he felt in his bare toes. The inhuman sound seemed to rise from the earth in waves, suffocating his vision as the soil appeared to come alive all around him. His eyes wide, Andile saw the earth open as if sliced, and seething below the rent skin was a mass of pale, gleaming ropes.

Wordlessly, he tried to run. His lungs burned with the effort of it, but time, for him, seemed to stand still. As he watched the ropes burst from the ground he realised they were limbs,arcing through the sugarcane to wrap around his ankles, his torso, his wrists. The thrumming tentacles quickly surrounded the boy, pulling him inexorably into the soft, dark earth.

Underground, unseen, a synthesised, humanoid skeleton began to evolve as the alien creature forged new joints and sinews, combining its own DNA with each new component that stumbled into the cane field; mysterious disappearances explained away by witchdoctors and muti murders. Nestled in the dark earth, the drone faded and the susurration of crickets and cane leaves reclaimed the night air, patiently awaiting the day a superior army is born from the earth. 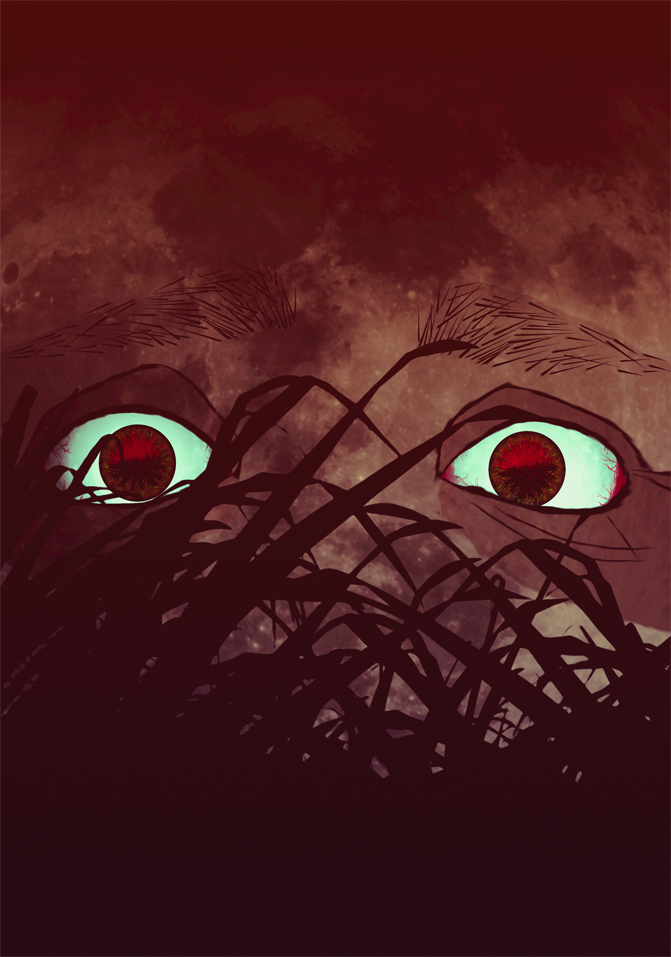 
About the author: Leah Gharbaharan is a graphic designer living and working in Cape Town. A childhood spent reading developed into a fascination with narratives in various forms, from film to six word stories. Her writing is done in a personal capacity since she's currently focusing more on  design and illustration. She hopes to dedicate more time to writing in future though, particularly in the genre of speculative short fiction.

Story first published in TechSmart 136, Jan 2015. It can be downloaded or read here.