The Surface Laptop is Microsoft's simple take on notebooks

Earlier this week, leaked images of Microsoft's new Surface Laptop showed up online. The pictures turned out to be spot on, with the company unveiling the device at its Education event in New York yesterday. The notebook is designed for university students, according to Microsoft and also sports Windows 10 S, with the option to upgrade to Windows 10 Pro.

Fitted with a 13.5" PixelSense display (2256x1504) that delivers up to 3.4 million pixels, coated in Gorilla Glass 3, and touch-enabled, the Surface Laptop appears to be more like the Surface Pro tablet than the Surface Book notebook. This is evidenced by the Alcantara keyboard, which features fabric that's slightly resistant to liquids and has an added level of cushioning for users to rest their palms on more comfortably while typing.

Added to the combination of fabric and aluminium, the Surface Laptop will land in four different colours - Platinum, Graphite Gold, Cobalt Blue and Burgundy. The local availability is unknown, but given Microsoft's history with Surface-branded devices, we're not counting on the Laptop arriving on our shores. For the regions it will be landing in though, Microsoft has listed it start at $999, with consumers in the US first to receive it on 15 June.

Shifting back to the specifications, the Surface Laptop will be available in either 7th Gen Intel Core i5 and i7, with choice of 4 GB, 8 GB and 16 GB RAM variants. They'll also be a configuration option for the storage, with 128 GB, 256 GB and 512 GB SSDs. On the connections side, there's a USB 3.0 port, headset jack, Mini DisplayPort and Surface Connect functionality. 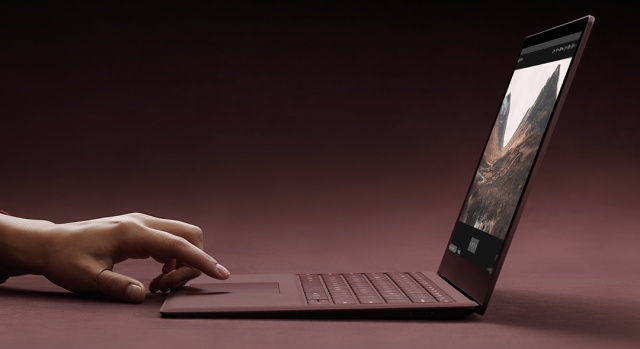 Whether students will cough up $999 for a notebook that is only able to run applications downloaded from the Windows Store, with only 4 GB of RAM remains to be seen.

Check the Surface Laptop in action in the video below.