The rAge gaming expo is undoubtedly an assault on the senses, serving up the biggest gaming titles, latest developments and merchandise aplenty. With untold riches to explore within the Coca Cola Dome's great hall, we run down the most exciting sights and sounds.

If you're a local gamer, and find yourself on the Highveld this weekend, chances are that you'll be heading to the Coca Cola Dome for this year's rAge gaming expo. The expo is a proverbial treasure trove of gaming delights to keep the most hard to please fan happy. Although it may not be as large as E3 in the US or Gamescom in Europe, rAge certainly holds its on, with all the major players in the gaming industry showing off the best they have to offer.

So much so that Microsoft and Sony have been placed at each end of the expo, perhaps to ensure that die hard fanboys don't clash with one another. Whichever console takes pride and place on your living room however, both companies have pulled out all the stops to showcase their exclusive titles. Not just designed for the console gaming, PC gaming companies too, are given a platform to display their efforts at rAge, with Evetech, Asus and Logitech all joining the party.

Regardless of your geek tastes, there's plenty to sample at rAge, although trying to negotiate the swelling crowds does take some time to do. With that in mind, we've run down the best things on offer at rAge. 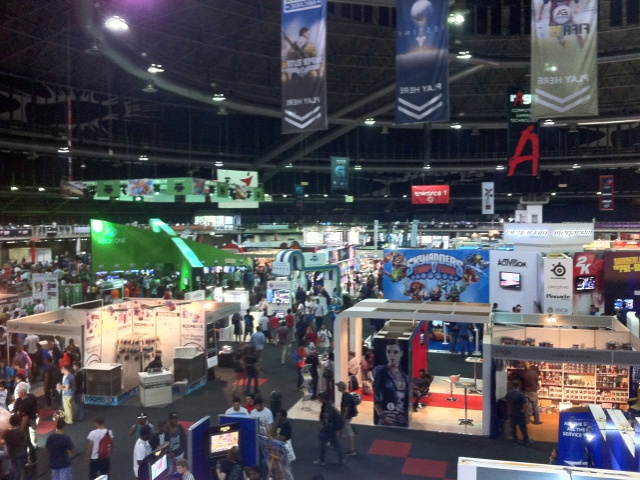 Most gaming fans first interaction with this particular title took place at their local arcade, as they became quickly desensitised from game violence. We are of course talking about Mortal Kombat, which was once the fighting game to trump in the early 90s, since then however its power has waned somewhat, with recent iterations failing to impress. That streak may be set to end soon, as Mortal Kombat X looks a very enticing title. At rAge, WB Games had a large booth with multiple demos of the game running on PS4s. Unfortunately photography was banned, although that may of been a good thing, given the brutality and mercilessness that gamers inflicted upon one another. 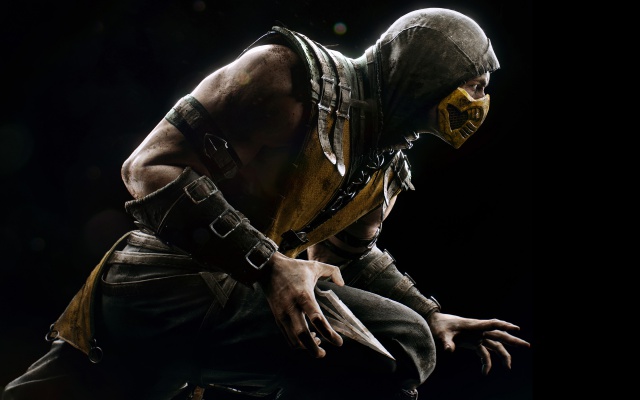 We were told that WB Games, along with developers NetherRealm will be showcasing a new character each month, building up to its April 2015 release date. At the moment, the Mortal Kombat X roster sits at eight characters, with Scorpion and Raiden proving to be fan favourites, as evidenced by rAge attendees selection. Although a demo, the gameplay and character mechanics were fluid, with attacks, blocks and counters responding well to player prompting. The image quality of the game was equally impressive, particularly on the next-gen PS4 console, with fatalities looking as gruesome as ever. We can't wait to get our hands on the full version next year, and start dishing out some pain. 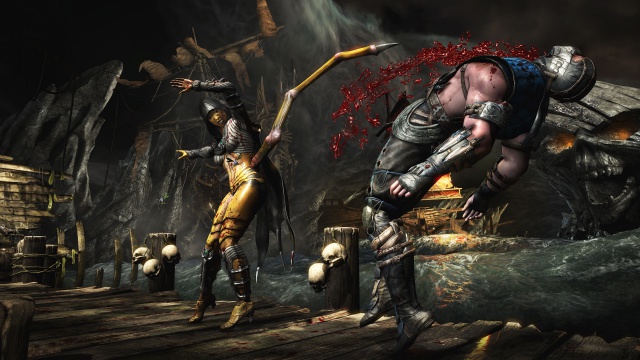 Evolve makes you root for the monster

One of the other games drawing plenty of attention at rAge is Evolve, the fast paced multiplayer from Turtle Rock and 2K Games. There's plenty of hype surrounding this game, especially given the fact that its swept up multiple Best Game awards in the past few months during worldwide gaming expos. Sometimes games struggle to live up to the hype, but Evolve does not seem to suffer from that particular ailment. Distributed locally by Megarom, who also have a number of other titles on display including Destiny and Assassin's Creed Unity, it was Evolve however that garnered the biggest line of fans waiting to play. 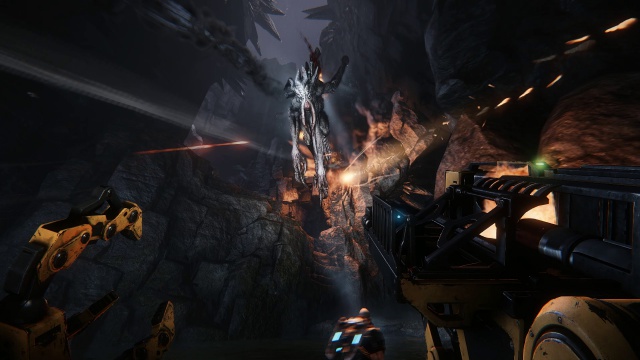 Part of the attraction is Evolve's 4v1 multiplayer mode, pitting four of the human bounty hunters against one massive monster, with gamers being able to play as either faction. The lure of playing as a genetically altered, highly volatile killing machine proved too good to pass up, and we think gamers will feel the same way, as they stalk their prey amid the densely forested alien planet.

The hunters are not completely helpless though, with a particular emphasis being placed on four person teams having the right blend of firepower, stealth and tactics to get the job done. Destined for release on 10 February 2015, Evolve looks to set the bar fairly high, as far as FPS games go. Behind closed doors, it was a brilliant thirty minutes of Batman: Arkham Knight that assailed our senses.  While last year’s Batman: Arkham Origins left us with feeling a bit underwhelmed, we cannot say the same at all of the forthcoming Batman Arkham Knight from Rocksteady, and the next chapter in the trilogy. We are not sure whether it is because of the new TV series Gotham bringing the gritty, gothic world back into focus, or just that the demo shown was simply kickass (literally and metaphorically), but but either way the world of Gotham has never looked better, grittier and more alluring.

Of course, the star of the show was not just Batman, but the Batmobile, and suffice to say, it looks like this will be a great deal more than just a means of traversing the environs, but a potent fighting tool in Batman’s arsenal as well. This is definitely a title to watch out for it in 2015.

Assassin’s Creed: Unity kills it with the crowds

Judging by the long line waiting to have some hands on time with Assassin’s Creed: Unity, the franchise has lost none of its allure even as it has racked up one entry after another over the years. Granted, we already saw a preview trailer a couple of months ago and the game was looking like a fresh entry in the franchise, but seeing it being played hands on only amped up our excitement. 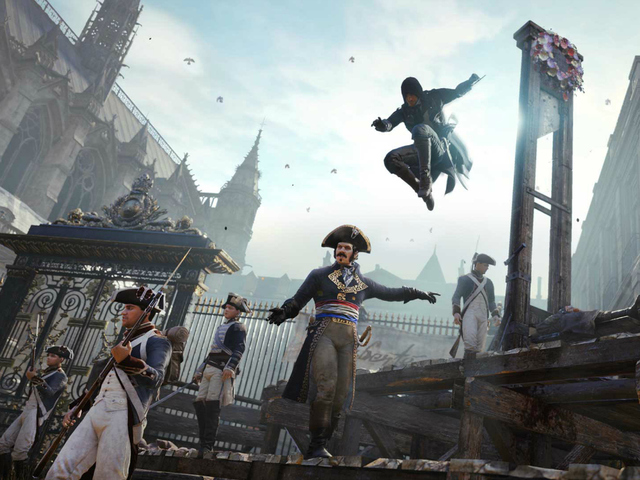 As you may already know, this time the game wil explore the bloody and brutal French Revolution, and let's just say that your assassin will have other things on his mind than looking for the local patissiere.

For those who have invested in the Xbox One, we were most pleasantly surprised by how the game is looking on Microsoft's latest console, with beautiful textures, terrific lighting effects and crisp details.

Sunset Overdrive is the wild FPS game Xbox One needs

Although Microsoft have set up a gargantuan Xbox One stall to further lure gamers, following its release a few weeks ago, one of its exclusive titles, Sunset Overdrive seemed to hog all the spotlight. We were particularly excited to play this Insomniac Games title, with numerous gameplay trailers highlighting its open world appeal and likeable lead character. When Insomniac Games said this game allows for interaction with nearly every object in it, they weren't joking. Taking place in the now post-apocalyptic world of Sunset City, gamers will be able to traverse and navigate their way around, in a number of ways. Grinding on the overhead power lines in particular was great fun, and reminded us of Tony Hawk's Underground 2. 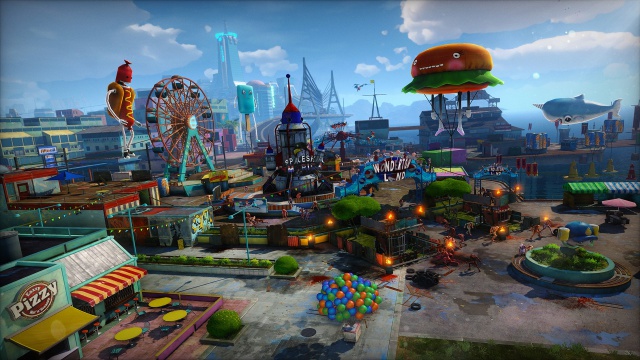 Added to this unique city and gameplay, is a fast-paced fighting style, placing an emphasis on killing enemies as quickly as possible, lest you become overrun. The main protagonist is customisable, with an encyclopedic number of catchy one liners to keep things a little fresh. All things considered, Sunset Overdrive does not look like a definitive reason to buy an Xbox One, like the Halo franchise for example, but certainly seems like a perk should you already have one. When you add to the mix, a fantastic open world, rapid fire action and uniquely styled environment, there's plenty to like about Sunset Overdrive. 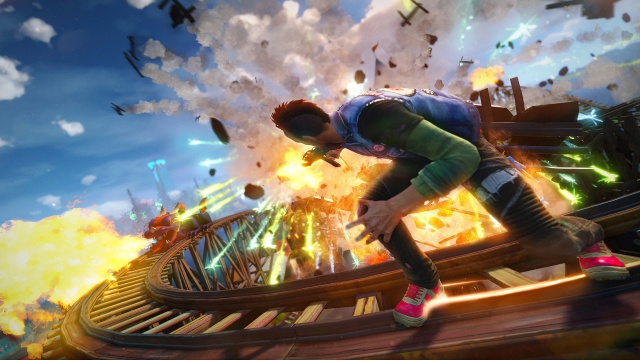 Cosplay is very much alive and well

Games, accessories and merchandise are all well and good, but one of the other less documented elements of rAge is the cosplay, with many attendees going to great lengths in order to bring their beloved characters to life. As is normally the case, Anime and Manga characters got a lot of attention, with the popular series Naruto in particular proving a crowd favourite.

TechSmart also got into the cosplay act, with two models wearing costumes that channeled their inner Chun Li. Group cosplay is also a popular choice, with the Monkey mask wearing gang from Grand Theft Auto V doing the rounds, as well as a number of Final Fantasy inspired characters. The three anime ninjas pictured below are our early front runners for best group cosplay, although we are sure that the remaining two days of rAge will serve up even more costumed attendees. 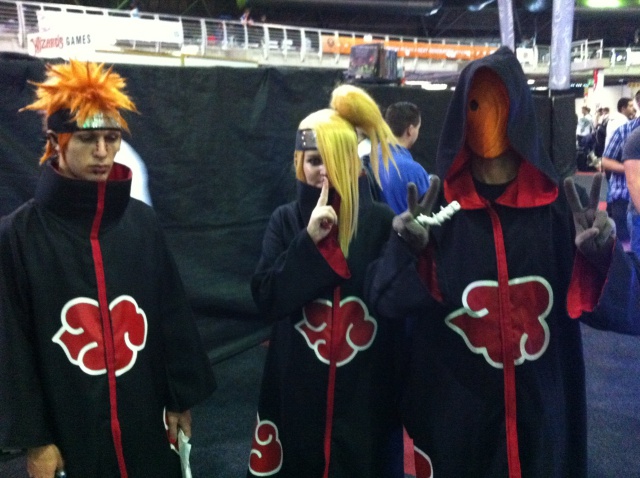 Whether you're a hardcore gamer, or just have a passing interest, a trip to rAge this weekend is well worth considering, especially given that there is plenty to look at, as well a numerous soon-to-be-released games to try out. The TechSmart stall will be up and running during the entire expo, so we urge you to head to the Coca-Cola Dome and check it out. For more info on ticketing, check out www.rageexpo.co.za.