Amongst enthusiasts and professionals engaged in graphics and digital imaging, there are certain programs that stand out as must-have’s to add to their creative toolbox. One of these is Corel’s Painter.

Thus, we immediately perked up when Corel announced the latest version of the program, in Painter X3.

For the uninitiated who haven’t yet experienced Painter, the program deftly imitates a variety of artistic media, giving one a dazzling array of brushes and artistic media from which to choose. This essentially gives you an art studio in your PC or notebook, especially when the program is paired with a graphics tablet such as the Wacom Intuos 5, or, if you can afford it, one of the pro-level Cintiq offerings.

Everything from acrylics, oils, pens, chalk and crayons, charcoal, pastels, palette knives and even watercolour that realistically drips down and dries on the digital canvas can be found here, amongst others. 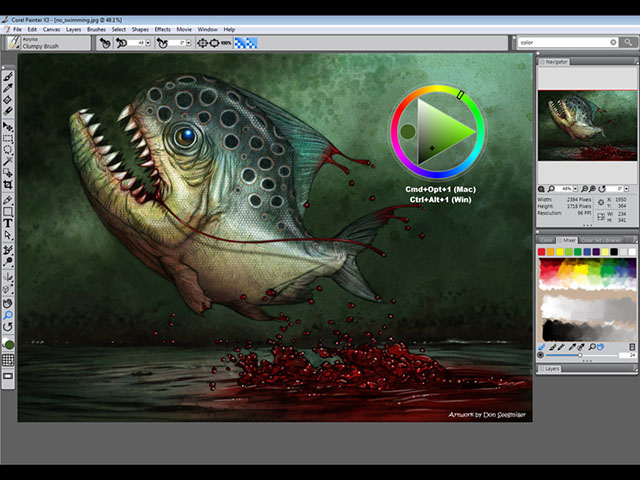 One of the features onboard here, called the Temporal Colour palette, usefully enables you to change colours on the fly.

One of the most notable – and useful – new additions is an enhanced stroke preview panel. This shows what each stroke will look like as you mouse over it before you actually apply it to your canvas, a feature we found imminently useful for previsualising and planning in which direction we wanted to take our painting.

Additionally, also on offer is a new brush search feature, which makes it easier to search for and find the right brush by text input (handy, given that there are so many), and a reference image panel. The latter enables users to dock an inspirational image or photo you may be working from, in its own panel. Better yet, you can also sample colours from the image or photo for your own use.

However, that’s not all the new version brings to the table. Also new are the Jitter brushes, which can be further customised. These introduce a carefully considered element of randomness to one’s strokes and thus one’s artwork, in a bid to mimic some of the ‘happy accidents’ that can be responsible for some of one’s favourite outcomes. Considering that our favourite form of art is abstract, more randomness was an opportunity we eagerly embraced. 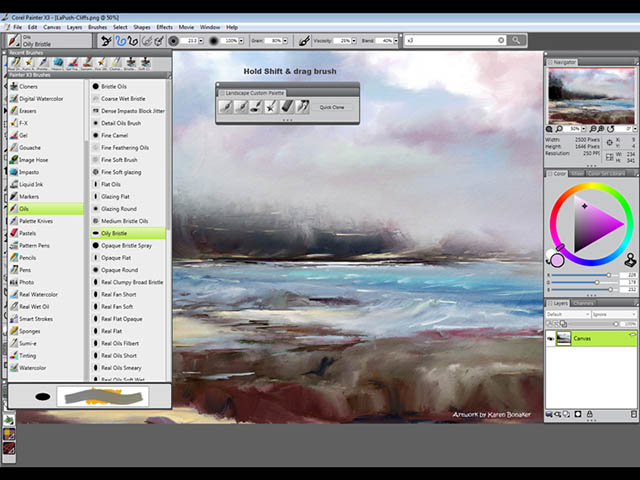 Another new addition we were happy to see was the ability to create custom palettes - useful if you have favourite brushes that you use constantly.

Two of our particularly favourite enhancements in the new version are the ability to now transform elements across multiple layers – particularly useful when you are putting together complex painterly compositions; and the ability to create custom palettes.

With regards to the former, Painter X3 still plays very nicely with that other doyen of the digital imaging world, Photoshop, and supports PSD files.

One caveat that has been true for Painter for as long as we can remember – this is one program that really does benefit from using a drawing tablet, such as Wacom’s Intuos 5, which Painter X3 does, like Painter 12, fully cater for. Yes, it does work with a mouse, however, painting and drawing in the program are much more natural when holding a pen-like stylus, particularly when you have degrees of pressure to play with as well.

The update is not perfect though, as we did have it crash on us once (so far). It seems that Painter X3 does prefer more RAM than its predecessor to run at its optimum, consider above its minimum requirement of 2 GB best.

Nonetheless, this iteration is the most intuitive Painter yet, and there are promises of a patch to come shortly. It has a RRP: R4 800 or R2 700 as an upgrade.