After weeks of colourfully teasing an imminent tablet announcement via a series of comic strips, Wacom has finally lifted the lid on its new artist-aimed tablet offerings. These include the Cintiq Companion, a Windows 8 tablet and the Cintiq Companion Hybrid, which instead runs off Android 4.2 (Jelly Bean).

Both tablets have their similarities, with each offering a 13.3” TFT LCD display and a formidable and artist-befitting resolution of 1920 x 1080. Also onboard are Wacom’s staples found on other Cintiq and Intuos devices, such as the ExpressKeys, Rocker Ring, radial menu, support for multitouch gestures and a Pro Pen, which boasts 2048 levels of pressure sensitivity.

Fork in the road

From here though, the two new additions diverge. The Cintiq Companion is essentially a Windows 8 tablet PC in its own right, boasting a 3rd generation Intel Core processor, 8 GB of memory and Intel HD Graphics 4000, as well as compatibility with the library of traditional Windows applications, such as Photoshop, Painter and Illustrator, for example.

Additionally, this tablet will apparently be available in two flavours, one with a 256 GB solid state drive (SSD) or a higher capacity one with a 512 SSD drive.

For those who were hoping and praying that Wacom was going to go the Android route, well, your prayers have been answered too, as the Cintiq Companion Hybrid does just that. It packs a Tegra 4 processor, and will run Android apps as well as Wacom’s own Creative Canvas. Similarly, it will also be available in two versions, one with 16 GB and another with 32 GB of storage space. 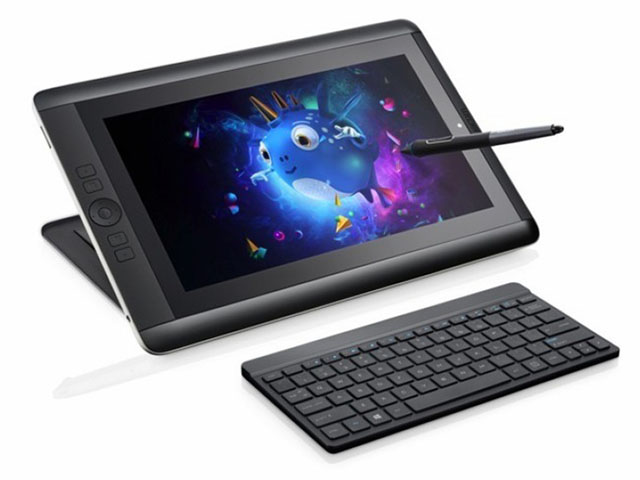 Wacom is betting that its new Cintiq Companion tablets are the devices that mobile artists have been pining for.

Whereas the Cintiq Companion is intended as a standalone digital canvas in its own right, the Cintiq Companion Hybrid can double as one, enabling users to plug it into their PC or Apple Mac setup and using it as a drawing tablet, as with other, conventional Cintiq peripherals.

“The new Cintiq Companion line enables mobile creatives to carry out their jobs without compromising on the high performance required for delivering professional grade design and artistic output," commented Don Varga, professional products brand director at Wacom Americas. "This is a truly ground-breaking product line that redefines the way creative professionals work, empowering artists and designers to immerse themselves in their work without being confined to a traditional studio or office," he continued.

We have already seen a number of both Windows 8 and Android tablets, some good, others less so, some geared towards general users and others that are more niche oriented. However, Wacom’s focus on creatives and digital artists seeking to take their virtual canvas with them on the go is certainly a welcome one, and seems promising on the face of it.

While we do wonder whether 13” may be just a bit too big to make them truly portable, that is not really the nagging question. We are more interested in what kind of battery life these devices will offer (Wacom doesn’t commit to any specification as yet).