Asus chairman Jonney Shih has unveiled the company’s Zenbook UX series notebook during a launch event in New York. Meant to compete in the increasingly popular ultrabook range, the Zenbook pulls form and function stylishly together.

Boasting a silver exterior panel that features a concentric circle design that refracts a halo of light, the Zenbook is one trendy looking notebook. At a thickness of 0.11” (about 2.8 mm) at the front and 0.35” (almost 9 mm) at the rear, the Zenbook’s exterior lines are extremely sleek, making it the thinnest ultrabook on the market according to Asus.

The Zenbook is designed with an instant-on feature that resumes the system in about 2 seconds and features standby times up to two weeks, four times more than the industry standard.

Powered by the latest Intel 2nd generation Core i5 and i7 processors (optimised for mobile use), the Zenbook will sport quick performance, despite its sleek profile. Speed is also on offer in terms of storage via SATA Revision 3.0 solid state storage (SSD) and connectivity courtesy of Bluetooth 4.0 as well as USB 3.0.

Asus has included USB Charger+ technology, which uses the powered USB 3.0 port to recharge portable devices in a fraction of the time it would normally take. To accommodate all of these technologies, the company’s engineers designed custom cooling technology using a V-shaped channel with a unique copper fin design for improved airflow and cooling.

The Zenbook also utilises Asus’ patented Super Hybrid Engine II technology to conserve battery life and this enables the notebook to have up to 25% more battery life than other Ultrabook designs.

Boosting the Zenbook’s audio performance is Asus SonicMaster technology, which is an optimised mix of hardware and software developed by the Asus Golden Ear team together with Bang & Olufsen ICEpower, providing a wide sonic spectrum surround sound.

“In the few months since Intel first unveiled this new type of device, ASUS has delivered an amazingly light design powered by the visibly smart performance of the second generation Intel Core i7 and Core i5 processors. It’s packed with the security, responsiveness, and other exciting features, that deliver on the promise of the ultrabook, to offer the most complete and satisfying computing experience.”
The Zenbook will be available for order in the US as of 12 October. While no local pricing info is available yet, Asus stated that it should arrive in South Africa by November/ December. 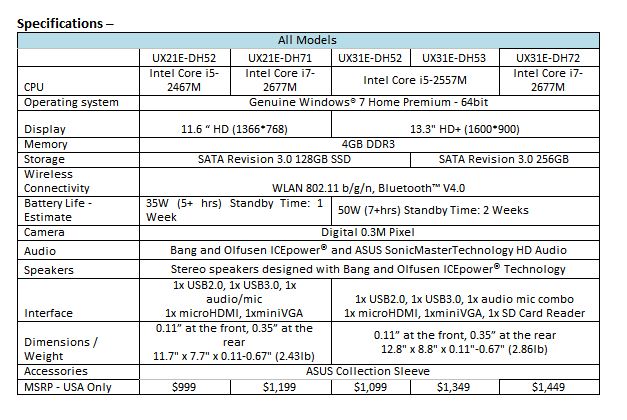