Even though Nokia is fully committed to using Microsoft’s Windows Phone OS as its primary smartphone operating system (OS), it doesn’t mean that the cellphone giant has given up on its former platform of choice, Symbian.

Nokia has revealed that users employing its latest Symbian-powered handsets are now able to download the Microsoft Office Mobile app. This makes the mobile versions of Word, PowerPoint and Excel available to more mobile users, since only Windows Phone OS-running devices had free access to the full Microsoft Office Mobile app up until this point. Now this collection of productivity apps is also available for the Nokia 701, Nokia 700, Nokia 603, Nokia E7, Nokia X7, Nokia C7, Nokia Oro, as well as the Nokia C6-01.

Users can get this app by connecting their smartphone to a PC and downloading it via the Nokia Suite software, or by clicking on the Nokia Software Update icon on the smartphone’s home-screen. We recommend that you connect to your home or office Wi-Fi network if you opt for the latter, since this download tips the data scales at 50 MB. The Finnish firm stated that the Office Mobile suite will also be available from the Nokia Store in “just a few weeks.” 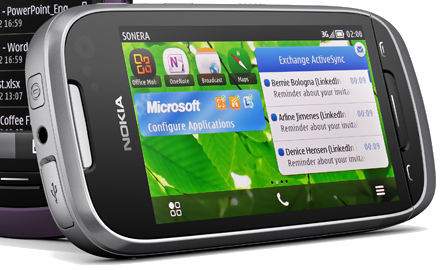 For those who own a Nokia N8, Nokia E6 or Nokia 500, Espoo said that it will announce the availability of Microsoft Office Mobile app for these smartphones at a later stage, whilst the Nokia 808 PureView will come with all these apps when it becomes available.

In related news, Nokia expanded the S40-running Asha range during the 2012 Mobile World Congress that was held in February, by unveiling the Asha 202, 203 and 302.
TAGS:
NokiaMicrosoftSymbianoffice productivityMicrosoft Office mobile
USER COMMENTS