Besides being hard at work on its latest Max Payne title, Rockstar Games is also hijacking many a gaming site’s headlines with the announcement that it is working on the fifth game in the criminally popular Grand Theft Auto (GTA) franchise. The company officially revealed that Grand Theft Auto V is in full development.

Developed by series creator Rockstar North, Grand Theft Auto V heads to the city of Los Santos and its surrounding hills, countryside and beaches, in the biggest as well as the “most ambitious game Rockstar has yet created.”

Rockstar stated that GTA V will deliver open-world freedom, storytelling, mission-based gameplay and online multiplayer. As with all its predecessors the game will focus on the pursuit of the almighty dollar and will take place in a re-imagined, present day Southern California.

Tom Clancy’s Rainbow 6 franchise is still on the roll, now that Ubisoft has announced Rainbow 6 Patriots. In Patriots, Team Rainbow faces a new threat called the True Patriots, who are a highly-trained, well-organised revolutionary group that claim the American government is irrevocably corrupted by greedy politicians and corporate special interest groups. This terrorist group (not affiliated we would think with the current Occupy Wall Street protesters) will do whatever it takes to reclaim their country.

Playing as Team Rainbow, players will face critical scenarios that will require them to make tough ethical decisions in order to stop this new breed of terrorists.

In addition to the single-player storyline, Tom Clancy’s Rainbow 6 Patriots also introduces a variety of co-op and multi-player experiences that will see gamers rewarded for working as a team and mastering the game’s new features that enhance communication and tactical execution between teammates. Tom Clancy’s Rainbow 6 Patriots is due for release on the Xbox 360, PlayStation 3 and Windows PC in 2013. 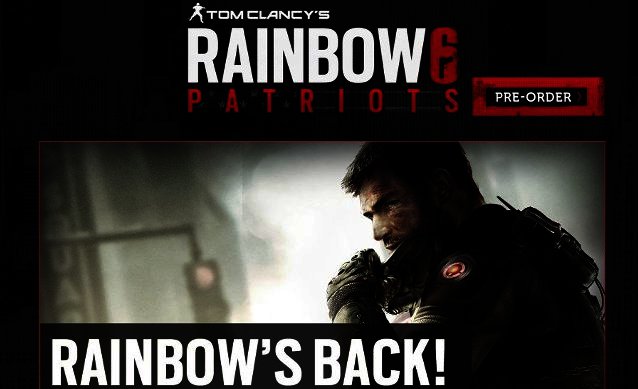 2012 to be the year of Silent Hill says Konami

It’s not only Silent Hill: Downpour that survival horror gaming fans can look forward to for next year. Konami has announced that a Silent Hill Re-Mastered Collection is also on the way,  combining two classic Silent Hill titles that will be released for the Xbox 360 and PlayStation 3. Silent Hill 2: Restless Dreams and Silent Hill 3, with enhancements such as high-definition graphics, will offer Silent Hill fans as well as newcomers to the franchise the chance to play through the living nightmare experience within these two games once more.

Silent Hill 2: Restless Dreams follows the story of James Sunderland as he woefully enters the sleepy town by a mysterious letter from his deceased wife. Here James meets the lumbering demon Red Pyramid (aka Pyramid Head), which is such a hopeless romantic that he’s trying his utmost to re-unite James with his wife, be it in the afterlife.

Silent Hill 3 is the sequel to the original Silent Hill game and centers around the forces of a demonic cult that spreads the insanity of the otherworld through Claudia. She is a cult member attempting to bring Harry Mason's daughter, Heather, into Silent Hill.

According to Gamespot the Silent Hill HD Collection will be released on 24 January and includes updated versions of Silent Hill 2 as well as 3, along with new voice-overs for the characters and updated 720p HD graphics. Silent Hill: Downpour will come out in March 2012 on the PS3 and Xbox 360. If you have the guts, check out the trailer posted below.

Last month Variety reported that Sony and Ubisoft is closing on a deal to bring out a movie based on the Assassin’s Creed franchise. Vulture has now pulled a Wall Street Journal, citing various unnamed insiders explaining why so many other studios, including Steven Spielberg’s Dreamworks, abandoned the chance to bring Assassin’s Creed to the silver screen.

According to Vulture it was mostly because of a vast amount of creative control that Ubisoft demanded that companies including Dreamworks, Universal and Warner Bros. pulled out. The deal that Ubisoft is on the verge of signing with Sony hands over full control of almost all aspects of the movie, such as the budget and the script through to casting as well as the release date, to Ubisoft.

“They want to be able to pull the plug on the whole movie’s development if they decide to. It’s ridiculous,” a studio boss who dropped out of the bidding process was said to say.

Another movie exec commented that, while his company understands Ubisoft’s need to ensure that their popular gaming franchise undergoes a smooth transition onto the big screen, "they're not moviemakers, and the only way to make sure it's a bad movie is to undervalue what movie studios do — and this is a deal that totally undervalues what movie studios do."

Another Ridge Racer title to pull out of Namco’s garage

Video game publisher Namco Bandai Games Europe has announced that Ridge Racer UNBOUNDED (trailer posted below) will be released on 2 March 2012 across EMEA (Europe, Middle East and Africa) as well as Australasia for the Xbox 360, PlayStation 3 and Windows PC.

This latest entry in the Ridge Racer racing series looks set to bring its brand of arcade handling and drifting elements back to the HD consoles and PC. It will also boasts a new car selection, including powerful vintage muscle cars, that will enable gamers to take over every alley and street corner in Shatter Bay.
TAGS:
Gaming News Round-upgnrcomputer and videogameRockstar GamesGTA VKonami
USER COMMENTS