Tech giant Google has released the latest Android mobile operating system (OS) usage information, revealing which version of the platform is used most on user’s smartphones and tablets. These figures were compiled from data Google collected during a two week period that ended on 3 December 2012.

As Android’s popularity heats up around the globe, more mobile device users are looking to cool down with a frozen OS delicacy called Ice Cream Sandwich (Android 4.0.3 - 4.0.4, ICS). This version of the OS is now utilised on 27.5% of all Android-powered mobile devices, up from last month’s 26%.

Thanks to the release of Google’s latest Nexus smartphone and new Nexus tablets, Jelly Bean (Android 4.1 - 4.2) has almost increased its usage share by 250% from 2.7% to 6.7% currently.

The steady decline of the massive user base of Gingerbread (Android 2.3 - 2.3.7) is luckily still continuing as users switch to more up-to-date versions of the mobile platform. Gingerbread’s usage figures dropped from 54.2% last month to 50.8% by the start of December, while its predecessor Froyo (Android 2.2, Frozen Yogurt) slipped from 12% to 10.3%.

Eclair (Android 2.1) has also hit the down button on the Android usage elevator, dropping its tally from a steady 3% over the last few months to 2.7% currently. This version of Android will hopefully soon join its predecessors, Donut (Android 1.6, 0.3%) and Cupcake (Android 1.5, 0.1%), in the Android retirement village.

Since both Jelly Bean and ICS now also handle the operating on most new Android-running tablets, the tablet-only Honeycomb’s (Android 3.1 - 3.2) usage pool has shrunk from 1.8% to 1.6%. 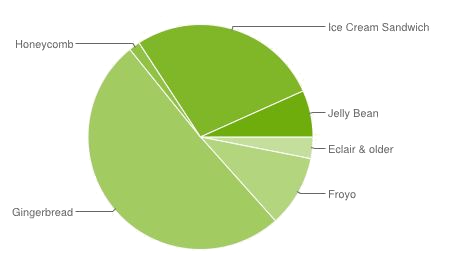 Pie chart: Google's Android Developers site
In related news, Google also recently added Botswana to the list of African countries to be integrated on Street View. Our Southern African neighbour is only the second African nation to be integrated on Street View, following the local launch of this service just before the 2010 FIFA World Cup.
TAGS:
AndroidGooglesmartphonetabletmobile devicetech stats
USER COMMENTS