Technology giant Google has released the latest Android mobile platform usage data, revealing which version of the mobile operating system (OS) is employed most on user’s smartphones and tablets. These figures were compiled from info Google collected over a two week period that ended on 1 November 2012.

The latest version (4.1 - 4.2) of Android, dubbed Jelly Bean, managed to show a bit more growth initiative by climbing from 1.8% during the start of October to 2.7% currently.

This sweet version of the OS looks set to get a usage tally boost within the next few months, with the release of Google’s newly upgraded Nexus 7 and Nexus 10 tablets, as well as the Nexus 4 smartphone.

Gingerbread (Android 2.3 - 2.3.7) is still leader of the Android version pack, but its user base is on the decline from 55.8% during October to 54.2% by the start of November. This ageing version of Android is still running on over half of all Android mobile devices, while its predecessor Froyo (Android 2.2) slipped by almost a full percent from 12.9% in October to 12% for November.

Eclair (Android 2.1) once again holds steady in terms of its user base, with just more than 3% of all Android users utilising this outdated version. Its similarly stale Android compatriots, Donut (Android 1.6) and Cupcake (Android 1.5), also held onto their respective usage shares of just 0.3% and 0.1%.

With both Jelly Bean and ICS now handling the operating on most new Android-running tablets, the tablet-only Honeycomb (Android 3.1 - 3.2) will almost certainly see its usage pool shrink. For the time being, however, it holds onto a minority usage stake of 1.8%. 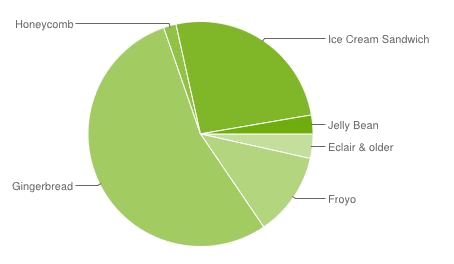